The Muscovy Duck – A Strange And Noisy “Masked” Duck
Share:FacebookTwitterPinterest 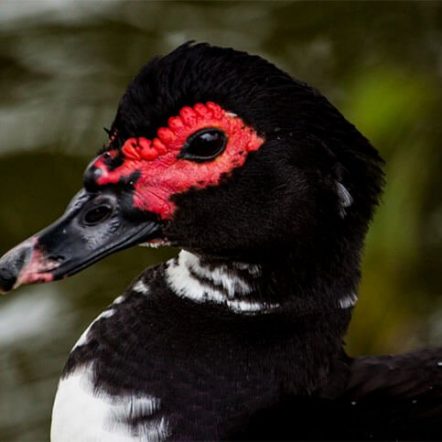 The Muscovy Duck – A Strange And Noisy “Masked” Duck

The Muscovy duck is a species native to South America and in Europe, in its domestic form. It’s specialised in the production of excellent quality meat (even if it does not enjoy a great reputation for the smell of musk that emanates from the uropygium gland; however, this odor is perceptible only in subjects over a year old; the decapitation of animals immediately after death eliminates the characteristic odor) and liver which is suitable for producing foie gras.

Everything You Need To Know About The Muscovy Duck:

This bird is very noisy, especially the females and they are not ashamed of it at all! Its verse is one of the reasons it was promptly discovered and recognized by early bird watchers. Not only it is not silent, but it produces a very rich range of sounds both at low intensity and hissing, as if it were breathing heavily. The state of mind of this animal can also be guessed by looking at its tail which wags when it is frightened or agitated. If the female is noisy, even the male does not joke and emits guttural exhales that are not very pleasant and that one cannot avoid noticing.

The name ‘duck’ indicates a genus of birds belonging to subfamilies of Anatidae that have a common feature: a wide beak with gills, which serve to filter food particles that are present in the water. Also known in some languages as musky duck, Cairina moschata is the scientific name. It is a bird belonging to the Anatidae family and today it seems to be the only known species of the genus Cairina.

In this species, unlike others, the differences between male and female specimens are striking, this means that there is a rather strong sexual dimorphism and not only in the size of the two sexes. The size, however, affects their type of flight: higher and more slender that of females and lower that of males. From a behavioral point of view it’s extremely docile, especially with human beings taking care of it. In fact, it is no coincidence that the Muscovy duck is often chosen as a companion animal.

Compared to other ducks, this molt has less developed uropygial glands, this might mean little to you, but translated in practical terms results into having a plumage that is consequently less oily. It is therefore easier for the feathers to absorb moisture and become heavier, this happens for more exposed feathers such as the flight feathers and back feather but there are also consequences for the under-feather which is less thick and dense.

In the male of the Muscovy duck, there are very evident caruncles around the eye and on the cheeks with colors that can vary from time to time from black to red. The aesthetic result is a mask effect above the beak that can be either black, pink, or even dark red. Orange-yellow or even black are the webbed legs, characterized by rather sharp nails.

Quite difficult to spot this bird that is native to the South American continent in the pond of our neighborhood. It’s widespread today in various areas, from Paraguay to Guiana. There have been sightings of feral populations derived from wild domestic ducks in Florida and elsewhere. They arrived in Europe long ago but are still not as widespread as other ducks are.

Like many of its flight mates, the Muscovy duck stays where there is water and prefers places with a high level of humidity also because its body constantly needs water for drinking and bathing, even if it’s just a small pond, it’ll do.

It eats mostly vegetables of all kinds without being picky, it doesn’t despise even soggy tree leaves. It’s not a vegetarian, however, because its diet also includes small insects, mollusks and worms that it hunts in ponds, swamps or among the surrounding vegetation. It’s an aggressive duck and males often fight over food as well as territory or partners.

The Muscovy duck lays four times a year, for a total of about 100 eggs per year. The eggs have a greenish yellow shell and weight 70-90 grams on average. After laying the eggs, between 8 and 16 for each litter, it starts hatching them for a period that is longer than that of common ducks, and it’s around 5 weeks, or 35 days. At birth, Muscovy duck chicks are very lively and immediately follow their mother to pasture and in the water, quickly learning to feed on their own.

Muscovy ducks are classified as Least Concern (LC) in the IUCN’s Red List, however their numbers are decreasing, with an estimated population estimated somewhere between 100,000 and 1 million birds. Unfortunately, in their range, there’s almost no type of survey of their numbers, so we know very little about the status of their population.

The conservation of lowland tropical wetlands is very important in order to improve their chances of survival as well as establish a ban on their hunting, as this seems to be one of the major causes for their decline, especially in Mexico. While in Central America their eggs are extremely sought after.