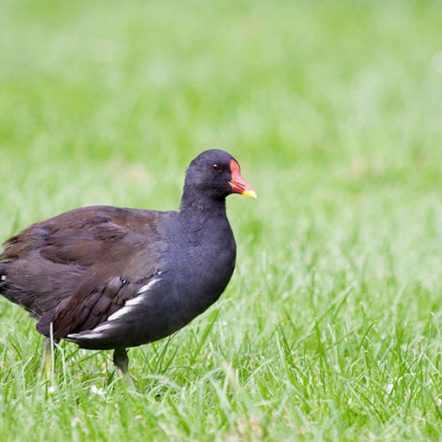 The Moorhen – A Widespread Migrant Bird

Moorhen prefer to make their nest in the dense vegetation along the banks of ponds, lakes and rivers and reveal their presence only when performing their guttural calls. In winter they are much easier to observe as they abandon their sheltered habitat to venture out onto meadows, parks and open waters. As they swim or move on muddy surfaces or lawns, they move in jerks, nervously shaking their tails and showing off the white feathers of the under-tail. With their long fingers they are able to move walking on floating leaves.

Everything you need to know about the moorhen:

The scientific name of this species comes from the green color of the terminal part of the legs (from chloros, green, and from pous, feet). The name “moorhen” is probably due to the similarity of this bird to a small hen, in fact, both for its physiognomy and for its attitudes. In fact, individuals of this species often perform a particular movement of the neck and head while swimming. Its distinctive features are black plumage and a bright red beak, as well as a typical red garter on its legs. In flight it is clumsy and, before hovering in the air, it takes a short run on the surface of the water. In case of emergency, the moorhen is also able to dive.

It’s a solitary species mostly. Some exceptions can be had during the winter, when several individuals can gather on the grass near the water in search of food. Difficult species to observe in flight: it mainly carries out short movements at low altitude above the surface of the water. Normally it can be observed while it searches for food on the water, without diving, and on the meadows next to the wetlands. Like other bird species, in the places it frequents in close contact with humans (for example in parks) it is quite confident and not very fearful. It makes a hoarse, harsh, croaking sound.

The moorhen is a medium-sized aquatic bird, the body is almost completely dark except for the white streaks on the sides and under the brown tail. The head and upper parts are olive brown in color which during the winter are shiny. The beak is short and red with the exception of the terminal part which is yellow; connected to this there is an always red frontal plate slightly larger in the adult male than in the female. The top of the body is brown-olive. The latter is short, pointed, with a clear white streak and always stay raised if compared to the rest of the body. The legs are yellow-green with very long legs and toes. A peculiarity of this species is given by the presence of a red spot, called garter, above the joint of the tarsus.

The juveniles have slightly different appearance compared to the adult: the upper parts are clear while the lower parts are brown, the throat is whitish, the beak and front plate are smaller grey-green colored. It is generally a solitary bird but occasionally it gathers in small groups with the purpose looking for food. Its diet is mainly based on aquatic plants, seeds, berries and, to a lesser extent, mollusks, worms and insects. The moorhen swims gracefully by shaking its head slightly. When in a dangerous situation, it assumes an upright posture with an elongated neck and moves its tail up and down to show its white feathers.

The moorhen is typical of aquatic environments, not elusive like other members of the same family and therefore, easily observable, especially at sunset when it goes out to feed. In the optimal habitats moorhen can reach a very high density, both in the reproductive period and during the wintering, when it usually tends to meet in large groups. Originally typical of marshy areas, the moorhen is currently widespread also in crops characterized by the presence of streams, albeit of modest flow.

It is even possible to observe it in the small canals adjacent to the roads, provided they are accompanied by strips of vegetation. The moorhen is present in all European countries, including southern Scandinavia. In the south-western parts of the continental range it is sedentary or dispersive, while it is migratory (partially or completely) in the rest of the territory. A small number of individuals winter in the Nordic and Eastern countries, while most spend the cold season in the Mediterranean and Balkan areas.

The moorhen feeds on grazing mainly plant species: shoots, leaves and seeds of aquatic plants, and cereals, such as rice and wheat; however, it does not disdain foods of animal origin, such as tadpoles and snails.

The moorhen cooperate in defence of the brood, and the young of the first brood of the season take care of the defence of the territory and the care of the following brood. They nest in swamps, freshwater lakes and ponds with emerging vegetation. They usually make a dome-shaped nest using grass and plants, placing it on vegetation above water, land and sometimes even directly on the water, with a slide to go back in it and sometimes featuring even a cover for hiding.

Producing between 5 and 8 eggs, these will be incubated by the couple for about 20 days. There can be 2 or 3 broods a year, between April and July. The chick will grow feathers as early as 40 to 50 days. During this period, the parents take care of the first brood, but when it becomes relatively independent, a second litter is born and sometimes even a third.

The moorhen is not considered threatened and is not protected. It is even capable of withstanding high rates of pollution and does not avoid areas with a high degree of urbanization. However, since during the nesting period it is particularly dependent to humid habitats rich in marsh vegetation, the presence and consistency of the moorhen could be in some way influenced by the rarefaction of these environments, primarily due to reclamation interventions. For conservation it is therefore important to maintain large bands of vegetation along watercourses.