The Linnet – A Bird Always On The Move!
Share:FacebookTwitterPinterest 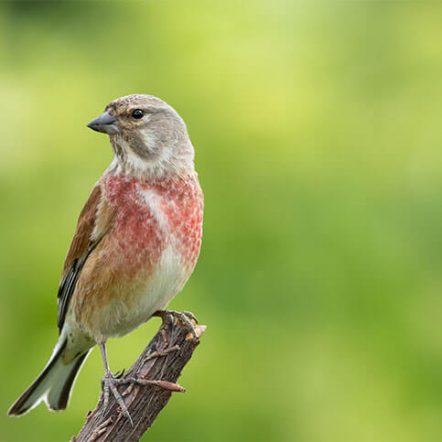 During the winter, the species stays in the meadows, in numerous flocks, or in the open countryside, where it ventures, among hedges and rows, in search of seeds or some insects. Distinctly gregarious habits that the species sometimes maintains even during the reproductive period when it nests “in society” among the dense vegetation, in the bushes and in the hedges. With a particularly melodic call, it is often captured to be bred in captivity and sometimes hybridized with the Canary.

Everything You Need To Know About The Linnet:

Unlike many other species of birds, during the reproductive period the absolutely not flashy linnet doesn’t own a feeding ground. But instead collectively uses surfaces with a decent amount of food available, like mowing lawns. The nesting bird usually cover and protect an area of about 15 meters around the nest, this limit is respected and getting too close is avoided by the neighboring couples. The male enjoys hanging on the branches around where the nest is located, showing off on top of a bush or on some higher ground. By doing this he marks its territory of nesting that, together with the female, defends even from other species of birds.

It is a gregarious species in winter. It usually moves in groups looking for food both on the ground and on tall grasses and bushes, often in small groups. Due to its small size it is not easy to identify it especially when it is placed on the ground. Things are simplified when it is in flight (wavy and not fast) and then recognize it from other species of similar size especially for the white wing bar and the white external helms. It is a very active species and is constantly moving around.

The male in summer dress has tawny shoulders and back and the terminal part of the wings is blackish with a shaded white area visible even when the subject is posed. The head is grey with a red vertex and a white suffused throat. The chest is red / pink and fades to the dirty white of the abdomen and a suffused fawn on the sides. The legs and beak are sometimes grey with shades of fawn. The tail is blackish with white external coxswain.

In winter, the male assumes a color in all the upper parts of a tawny brown with a lighter brown head and the red disappears from the head and almost completely from the chest. All undersides are fawn white with light brown flecks on the sides. The beak is dark yellowish. The females resemble the males in winter dress but exhibit a grey-black beak and slightly heavier streaks on the sides and chest; the white area on the wing is much more subdued. Juveniles look almost exactly as the male in winter dress.

The linnet habitat extends to many areas of Europe, Asia and Africa. At least seven different subspecies have been counted, and the nominal species (Linaria cannabina cannabina) is also called Eurasian linnet to distinguish it from the others more widespread in Africa or in the islands (Balearics, Canaries, Corsica).

Like all granivorous birds, the Linnet feeds mainly on seeds, but also on insects.

It usually nests on bushes near streams, laying up to 4-6 blue-white eggs, dotted with light brown at the ends, for a maximum of two annual broods. The incubation of the eggs lasts about 13 days, and the chicks are ready for flight already 15 days after hatching, although they will have to wait a couple of weeks for complete weaning.

In order to improve the prospects of the species, it is essential to favor the maintenance of traditional agricultural landscapes in mountain areas with non-intensive agriculture and pastoralism. The maintenance of marginal elements such as small uncultivated shrubs, hedges and small trees or isolated shrubs in cultivated or grazed areas should also be encouraged, limiting the use of pesticides in orchards and crops frequented by the species.

To date it is particularly likely that the state of health of the populations is more favorable at higher altitudes, while at lower altitudes the combined effect between the abandonment of traditional agricultural practices, the consequent advance of the forest, the massive use of pesticides in areas subject to intensification of agricultural practices, has probably led to a significant reduction in suitable habitat.