The Laughing Dove – The Bird Loyal To Its Mate For Life
Share:FacebookTwitterPinterest 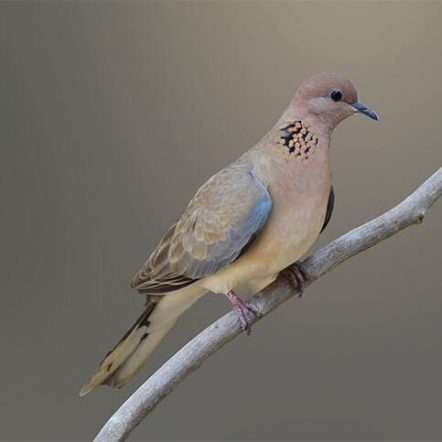 The Laughing Dove – The Bird Loyal To Its Mate For Life

The Laughing dove is a small bird that lives in the sub-Saharan regions of the African continent, in the Middle East and as far as India. This small dove and its long tale are often found in dry bushes and semi-desert environments, where the inseparable couples of laughing doves can be seen eating on the ground. It’s distinguishable from the other species of doves thanks tot the characteristic dark collar that gives the pattern and by its unique call. Also called Senegal Dove, Palm Dove and Little Brown Dove in India, when introduced to Western Australia it adapted very well and established itself in the Perth and Fremantle areas.

Everything You Need To Know About The Laughing Dove:

Obviously like all the other doves also the male of laughing dove coos, therefore, we can more easily recognize it than the female by this typical behavior, made by the call emitted by swelling the neck and addressed to his partner. Fortunately, his verse is not as strong as that of the common Oriental Turtle Dove (Streptopelia orientalis), of which it is a close relative.

Laughing doves are extremely popular as domestic birds. They are easy to breed, keeping an eye on the need of this bird to have a varied diet with fruits, but without exaggerating. They are birds that need large spaces, therefore it is recommended to breed them in rather voluminous aviaries, but they also lend themselves to being raised in freedom, providing them with the right shelter made with special wooden boxes hung with feeders and water.

Docile species that coexists with all peaceful and small-sized species. It is necessary to be careful to introduce other subjects in your breeding, making sure that they are free of some diseases, given the speed of contagion, a short hospitalization of new subjects is recommended.

Smaller than the Eurasian Collared Dove (Streptopelia decaocto), the head, chest and upper part of the belly are deep pink, broad reddish collar which on the upper part of the chest is sprayed with black, the back is brown, grey-blue wings with dark flight feathers, the tail is dark with white sides. Fast but fluttering flight, with dark, almost black underwing. It can sing for hours, usually from highly visible and audible locations.

In nature, its distribution range expands from most of sub-Saharan Africa, to North Africa (Morocco, Tunisia, north-east Libya and the Nile valley in Egypt), to the southern part of the Arabian peninsula, to the Middle East (Iraq, Iran), to the Indian peninsula, even reaching the area of ​​the former Soviet republics (Tajikistan, Kyrgyzstan, Uzbekistan, Kazakhstan). It has also been introduced in Palestine, Syria, Turkey, Malta and western Australia.

From this derives the presence of 5 geographic subspecies (4 African and one Asian), of which the typical sub-species (Streptopelia senegalensis senegalensis) and the one present in our aviaries certainly; as we have known for some years now the only species to be easily imported are the African ones. Anyway it is also certainly the most chromatically appreciable, given that the colors are more vivid and contrasting, the purplish pink chest and neck and head, the copper-red feather collar with the white black specks …

Rare resident, at the moment, in Europe, it’s present only in western Turkey. Partially migratory species; in some areas of Africa it performs seasonal movements.

It is a predominantly granivorous bird and it feeds on herbaceous plant seeds that it collects on the ground. It also frequents the cultivated fields of wheat and millet. From time to time it also enjoys feeding on larvae, termites, snails and other insects.

It forms stable couples that last for a lifetime. The bowing behavior of the male is very rapid and at the height of the bow he keeps the body almost horizontal to show the characteristic design of the collar to the female. Mating is preceded by reciprocal exchanges of care with the beak. the nest is built in trees or bushes or in sheltered places in the corners of buildings. The female will lay here two white eggs which are incubated for 13-15 days, by the male during the day and by the female at night.

Distributed over about 64,000,000 square kilometers and with a global population of about 2,500,000 to 8,300,000 individuals and an overall population trend consider to be stable, it’s no wonder that the laughing dove is reported as common in many places within its wide range.

With a very large range of expansion, this species doesn’t even approach the limits to be considered as Vulnerable, under a criterion of range size. Also the population trend appears to be stable, so under this criterion as well the laughing dove is not over the vulnerability threshold, same goes for the population size, which is estimated to be extremely large, hence there’s no reason to think the population size is close to being Vulnerable. For all these reasons, in the IUCN’s Red List, the Laughing dove is classified as Least Concern (LC).