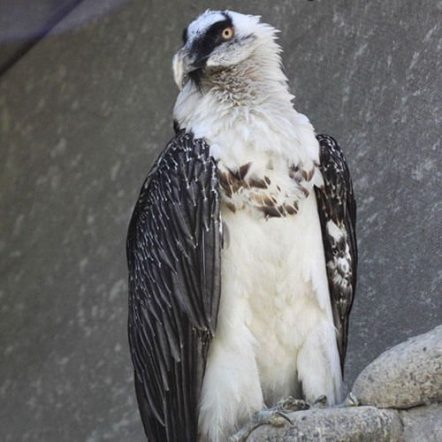 Imagine this: you’re on a hike on the alps and above your head you see flying a bird with a lamb in its claws. In the past it was a common belief that the lammergeier was a “lamb thief”. However, this belief is totally without foundation.

The lammergeier, also known as bearded vulture, is the only bird of prey member of the Gypaetus genus (scientific name Gypaetus barbatus) and its one of the four great species of birds of prey in Europe and the biggest European vulture. Named bearded because of its characteristic tuft of black feathers under the beak, their main source of nutrition is bones. What may appear macabre actually represent an important function for the bearded vulture habitat: its diet help to keep the Alps clean and prevent the spread of diseases.

Since it relies on sight to search for its preys, the bearded vulture flies mostly at low altitude, using dead animal skins to stuff its nest. When transporting these carcasses in flight to the nest it may seem that he has just preyed on grazing cattle. In past centuries because of this legend this bird became the object of a massive persecution, and it was also very much sought after as a hunting trophy. All this eventually caused the bearded vulture to disappear from the Alpine territory.

Thanks to an international effort over the last thirty years this marvelous bird is again populating the Alps. In 2016 about 220 lammergeier were populating the alpine territory between Austria, Switzerland, Italy and France, with a birth rate of 15 to 19 birds every year.

The adult can reach a length of about 110-115 cm and a weight of up to 7 kg, this size can can be easily obtained by both genders, the female is generally slightly bigger than the male, but the difference can’t be appreciated in nature as there’s no difference between the seasonal or sexual appearance, the gender can only be determined with a DNA test.

The lammergeier’s feathers present an obvious contrast between the ventral parts and the head, light in color, and the dorsal parts and wings, which are dark. On the white head it has tufts of black whiskers that surround the eye and go down under the beak to form the “beard”. The iris is yellow and it’s surrounded by a red membranous ring which becomes particularly evident when the bird is in a state of excitement.

A characteristic of the adult’s plumage is the rusty color of the chest and belly, which is not biological, but comes from the external environment. One of the hypothesis formulated on the causes of this coloring is the contact of the lammergeier with minerals containing iron salts. It has been observed that the bearded vulture is attracted by accumulations of earth and red damp sand, in which it takes “baths”, sprinkling the ventral parts of its plumage with this substances.

The juveniles has a completely dark plumages, except some times, where the feathers of the back can have some whitish spots. They then take their adult appearance in about 6-7 years, when they also reach sexual maturity, after going though a series of stages of intermediate coloring.

The lammergeier’s geographical distribution corresponds to the mountainous areas of Europe, Africa and central Asia.

In the Eurasian area, the distribution follows the line of the Alpine-Himalayan mountain ranges and extends from the Pyrenees, passing from the mountains of Corsica, throughout the Alps, Carpathian’s and the Caucasus to the Karakoram; the northern limit is represented by the Swiss and Austrian Alps and the Altai mountains in Mongolia.

Despite the abundance of wild ungulates of the African savannah, the bearded vulture has never settled in these flat regions as it prefers mountainous areas with little forest cover where there are rock walls suitable for nesting. According to a rough estimate, 50,000 individuals are thought to be present in the world.

Bearded vultures feed almost exclusively on the bones of dead animal carcasses. Even if they feed on dead animals, these vultures do not kill their prey. Thanks to particularly acidic gastric juices, they can easily digest large bones.

They particularly love the bone marrow which is located inside the bones and contains a lot of fat. To be able to extract the marrow, they fly by holding the larger bones between the claws up to a height of 150 meters. By then dropping them on the rocky bottom, the bones break up releasing the marrow.

When it does not find carcasses, it feeds on live prey like marmots. It is believed that he is unable to lift weights that exceed 2.5 kg.

The lammergeier begins the construction of the nest in October-November and it takes place on high rocky cliffs. Like the eagle, the bearded vulture normally lays 2 eggs but not in spring as the other birds do but in winter, because at the birth of the chick, after about 8 weeks, the food is more abundant as the animal carcasses are freed from the snow where they died of frost and avalanches.

In the first weeks of life the strongest chick, generally the oldest, kills the other. After about 120 days, the young bearded vulture tries its first flight, but will leave the nest definitively only when winter arrives.

Also known in the past as a lamb vulture, he was persecuted relentlessly because he was considered a dangerous animal. With his red eyes and with his large dimensions, he has been the protagonist of numerous beliefs. For a long time he was accused of killing lambs by swooping on them and of plunging chamois and ibex into the cliffs. It was even said that it kidnapped children. The main cause of the disappearance of the bearded bearded vulture from the Alpine arc in the 1900s must therefore be attributed to ignorance.

Thanks to an international program, since the 1990s, European alpine parks organizations such as the French Mercantour National Park, the Swiss National Park and the Italian Maritime Alps Natural Park, have started a reintroduction campaign freeing some individual bred in zoos.

In the Pyrenees the species survived; it’s not at risk of extinction but not abundant enough to allow withdrawals to repopulate the Alpine area.

The bearded vulture also declined in some parts of Asia and Africa, though less dramatically than in Europe.

The WWF made it possible to reintroduce this vulture in nature. In 1978 the first bearded vulture was released in the wilderness. Since then the WWF has financially supported this project, helping to raise awareness among the population by making the bearded vulture better known and denying many false rumors about it. To protect the still fragile population of bearded vultures, it is necessary to know their way of life and itineraries better: thanks to small satellite transmitters applied to some young specimens, scientists can collect data on their movements, which can reach up to 700 km per day.