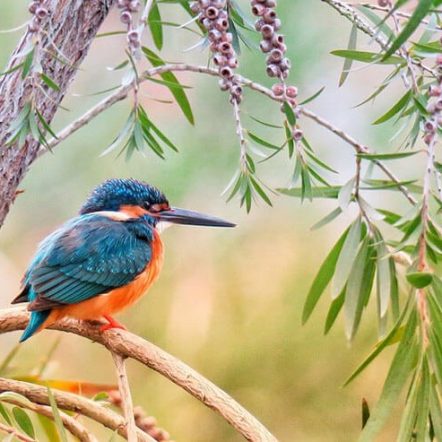 The Kingfishers are a diverse family of colorful birds. Once known as the halcyon bird in ancient Greece, these attractive birds have held a special presence in our lives throughout history. The name Halcyon would later be given to one of the three subfamilies. Kingfisher species are grouped into tree kingfishers, river kingfishers, and the piscivorous water kingfishers. There are 114 known species throughout the world.

The evolution of kingfishers is inter-twined with motmots, bee-eaters, and rollers among other birds of the coraciiform order.

Habitat and Geographic Distribution of Kingfishers

Kingfishers are widely distributed, with the majority of species found in Africa, Asia, and Australasia. They occur on every continent except Antarctica. Kingfishers favor tropical climates but also thrive in temperate regions.

Some species have extensive ranges. The common kingfisher occurs throughout Europe, Asia, and North Africa, with its range extending as far as Australasia. Meanwhile, other species only occur in specific geographic regions such as the Indigo-banded Kingfisher endemic to the Philippines.

Despite their association with riverine areas, Kingfishers inhabit a range of different habitat types. Depending on the species, they are found in forests, mountains, tropical islands, and along streams, estuaries, rivers, lakes, and dams. Although uncommon, some species have adapted to desert environments. In some parts, kingfishers also live in areas surrounding human habitation, such as woodlands, parks, gardens, and farmland.

Alcedinidaes are distinctive birds with characteristic dagger-like beaks that appear abnormally long in respect to their body size. They are small to medium-sized birds with large heads and short legs. The smallest kingfisher is the aptly named the African dwarf kingfisher and is a minuscule 10 centimetres long, weighing a dainty 12 kilograms at max. Towering above is the giant kingfisher at around 45 centimetres long. But the heaviest species is Australia’s iconic laughing kookaburra weighing in at a mighty 500 grams.

Most kingfishers boast a vibrant plumage with shades of blue dominating. Interestingly, the blue hues, in most cases, are a result of structural colouration rather than pigment.

The feathers are structured in such a way that it causes a scattering of blue light. This phenomenon is known as the Tyndall effect, and it manifests itself in various shades and varieties of blue on the upperparts of many kingfishers.

The underparts are typically rufous to chestnut-colored. This signature colouration can be observed across most species, but there are several exceptions. For instance, the pied kingfisher found in Asia and Africa is black and white, and the laughing kookaburra’s plumage is mostly beige and brown. In most species, there is little difference between males and females.

Despite the name, not all Kingfishers favor the strict piscivore diet. The water kingfishers are known for their specialization in hunting fish. But many species enjoy a wide variety of food choices that includes fish, insects, frogs, snails, and even venomous creatures like snakes and centipedes. Some larger species even prey on small mammals or the nestlings of other bird species. Many Kingfishers in Africa, Asia, and Australasia don’t fish at all. For example, the African pygmy kingfisher lives in woodland habitats and mainly feeds on insects.

Kingfishers are excellent hunters. They typically hunt from an exposed perch. Once their prey is in focus, they swoop down and catch it with their beaks. Kingfishers kill their prey by beating it against a perch. They then maneuver it into place before swallowing it whole.

The etymology behind the kingfisher family name is a mystery. The common Kingfisher was originally named “King’s fisher” for reasons unknown.

Kingfishers are known to have exceptional vision.  When diving, their eyes adjust to changes in refraction between the air and the water. This adaptation gives them binocular vision underwater, enabling them to judge depth when catching prey. Nictitating membranes protect their eyes like a pair of goggles. Kingfishers also have excellent color vision.

Kingfishers are generally monogamous, highly territorial birds. Females lay between 2 to 10 eggs depending on the species. The pair takes turns to incubate the egg. Incubation can last up to 3 weeks. Most kingfishers are solitary, but in some species, cooperative breeding occurs. This is when other birds in the group help the pair raise their nestlings and defend the territory.

Kingfishers nest in burrows on the sides of sandbanks, riverbanks, or in tree cavities. Some species build their nests in termite mounds.

Fun Fact: Giant Kingfishers excavate tunnels that reach up to 8.5 meters in length.

Kingfishers sometimes have a frightening way of commencing their nest excavation. If they are unable to poke a cavity while perched or hovering, they resort to aerial ramming. They dive at the substrate from a distance and striking it with force beak-first. This can go on for several days and, in some cases, may lead to injury.

Threats to Kingfishers and Ecological Importance

Sadly, many kingfisher species are threatened with extinction. Endemic species are particularly at risk from habitat destruction and deforestation. Many species are also at risk due to the introduction of non-indigenous species into their habitats.

Common kingfishers can be good ecological indicators. Their presence and success in an area can provide us with vital information on the overall health of the ecosystem.

Kingfishers feature strongly in society. According to mainstream religion, a kingfisher was said to be the first bird to fly from Noah’s ark after the flood. It was considered a symbol of peace and prosperity.

In the Victorian era, kingfishers were killed for taxidermy, and their feathers were used to adorn the hats of aristocrats.

Some ethnic tribes in Borneo considered certain species of kingfishers as omens – both good and bad. The Polynesians revered the sacred kingfisher and other Pacific kingfishers as they believed them to control the seas.

Their influence is also prevalent in modern times. The impressive Japanese bullet trains are said to be modeled according to the streamlined aerodynamics of a kingfisher’s beak to reduce the sonic boom effect and promote fuel efficiency.

This impressive family of birds has inspired us for centuries. Hopefully, we can repay them through conservation efforts, raising awareness, and sharing our appreciation for their role in nature.