The Indian Peafowl – The Most Fascinating Bird In The World
Share:FacebookTwitterPinterest 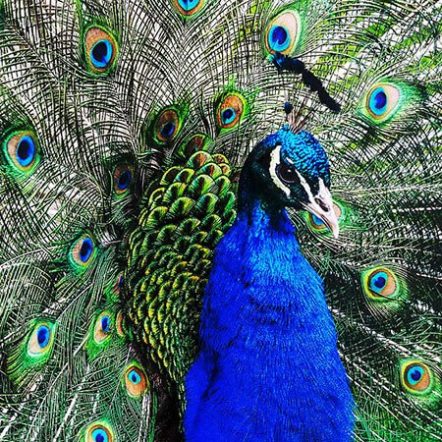 The Indian Peafowl – The Most Fascinating Bird In The World

In 1963, the Indian peafowl became the national bird of India. However, the magnificent blue bird with its exquisite plumage was an icon long before and far beyond the Indian subcontinent. The Indian peafowl, symbolises opulence, royalty, beauty, wisdom and also vanity. These birds are a sign of joy for all who see them.

The Indian peafowl is significant for many cultures in all corners of India, and it’s often present in Indian mythology, folk stories and arts. Originally from India and Sri Lanka, it’s now present in parks and gardens all around the world. In India it is present throughout the nation, particularly to the south and east of the Indus River. Not only it has been protected by the Indian Wildlife Protection Act since 1972, but it also enjoys great sentimental protection from the whole nation.

Everything you need to know about the Indian peafowl:

This eccentric bird is the absolute star of any garden. It’s no coincidence that it’s bred above all for its admirable plumage, so much, so that its multicoloured tail is appreciated to the point, that today the Indian peafowl is bred mainly as an ornament for parks and public gardens. The wonderful and inimitable livery that the males are able to display is the characteristic that has made this animal famous in every corner of the world.

The Indian peafowl is a bird belonging to the Galliformes family, the distinctive feature of this animal is undoubtedly its tail, wonderful and colourful in the male specimens. It has a specific function in courtship, as it serves to impress and conquer the female during the mating season. In order to attract the attention of the chosen one, in fact, the male vibrates the coat and raises the feathers of the tail giving life to a wonderful fan with a thousand colourful shades. The other function of the “wheel” is purely defensive: the Indian peafowl uses it to scare other animals and disorient enemies. The ‘eyes’ drawn on the plumage and the grandeur of the unfolded tail, in fact, make the bird appear much larger and fearsome.

Unlike most birds, the Indian peafowl is not a migratory animal. On the contrary, it’s sedentary, it doesn’t fly, and it lives in small groups. Usually each male is accompanied by 4-5 females, often followed by chicks. Even if it’s a walking bird, it prefers to perch in high places, especially at night, when the risk of being killed by some predator is higher. And even if it doesn’t fly, with one leap it can rise several meters above the ground. On the farm, it shows a decisive and aggressive temperament, somewhat territorial towards other animals; and it can become attached to those who care for it.

The males of this species present a worldwide appreciated beautiful appearance. They are as big as a Swan, reaching a length of about 195 – 225 cm. The Indian peafowl’s head, neck, and chest are an iridescent blue colour, with patches of white around their eyes, they also have a crest of short blue feathers on top of the head.

Obviously, the Indian peafowl’s most notable feature is its beautiful tail, which is fully developed after about 4 years from the hatching. The way the tails are coloured is extremely elaborate, creating a pattern that is kind of an optical phenomenon.

The female Indian peafowl completely lacks bright colours. They are predominantly brownish-grey in colour and sometimes have a brown crest. They totally lack the fancy tail and have dull, brownish, tail feathers, a white face and throat, brown back, white bottom and a green breast. They’re also generally lighter than males and can weigh up to 3.5 kg.

Native to India and Sri Lanka, the Indian peafowl is present in the wild in much of southern Asia below 1800 m of altitude. The extraordinary livery of the male has led man to breed the species as an ornamental animal almost all over the world.

Its preferred habitat is open woods full of clearings as well as shrubs with abundant food and close to bodies of water.

Its diet is extremely varied. Its favourites are fruits, seeds and insects, but it also eats small invertebrates from time to time. One thing that few people know is that it’s a fearless hunter of small to medium sized snakes! In fact its name in Sanskrit means “snake killer”, reason why in the Indian subcontinent this is often a precious and revered bird.

Parental care, from hatching to raising the offspring, is an exclusive task of the female, who produces a single brood of 3-5 eggs each year, which are incubated for about 4 weeks. The young males complete the development of the tail at about 3 years of age, and it can continue to grow it for another 3. In the wild, an Indian peafowl will live an average of 25 years, mostly by itself, it will form a couple exclusively during the breeding season. The rest of the year both males and females remain alone or at most in groups of 2 or 3 individuals.

In the 2018 Red List of the IUCN (International Union for the Conservation of Nature) the Indian peafowl is classified as “Less Concern”. As this species has been introduced pretty much all over the world, the threat of extinction is basically non existent. However, with the rapidly growing human population, Indian peafowls, in the wild, are facing an increasing reduction of their natural habitat, including access to water sources.

National Parks of India and neighbouring countries are making efforts towards the preservation of the habitats of this beautiful bird. As it’s as species that adapts extremely well, the Indian peafowl have been introduced to many countries in the world, in order to extend its population. Many people are actually raising and breeding this bird as a backyard pet.