The House Sparrow – A Very Common Bird, Waiting To Be Discovered
Share:FacebookTwitterPinterest 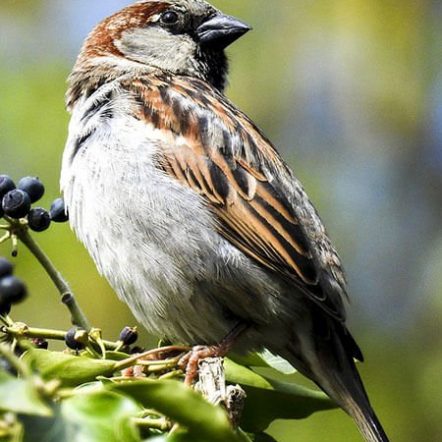 The House Sparrow – A Very Common Bird, Waiting To Be Discovered

The house sparrow is probably the most widespread and well-known species in Europe, both in cities and in the countryside. It’s a very sociable bird and, out of the reproductive period, it usually meets in groups of at least ten individuals. It doesn’t have a particular fear of humans, whom it actually often approaches in search of food. One of its most characteristic behaviors is the “dust and earth bath”, a practice that it performs when it feels the need to get rid of parasites.

Everything you need to know about the house sparrow:

Loved by some, not so appreciated by others, the house sparrow accompanies humans like no other species of bird, always finding some source of food near its houses. Today the species nests wherever humans live all year round. The development of winter tourism has allowed it to penetrate to the top of the Alpine valleys. The house sparrow is very adaptable and is capable of discovering possible sources of food very quickly, it uses the opportunity to grab the crumbs of tourists in mountain restaurants, to steal grain from poultry or to sneak into barns. Once the authorities ordered poisoning actions against it, and today the species is in decline in some European regions. This is an alarming sign that environmental conditions are worsening even for opportunistic species such as the house sparrow.

About 15 centimetres long, for a wingspan of about 21-25 centimetres and weighing up to about 32 grams, the house sparrow is characterised by a dark grey vertex, brown nape, black throat and whitish cheeks. The livery, streaked with black, has grey-brownish shades on the back and on the upper tail; the streaks on the eye are also black, while the upper parts turn towards a white colour with shades of red and grey, particularly on the sides.

Native to Europe and Asia, the common house sparrow has been introduced as far as South Africa, North and South America, Australia and New Zealand. It’s a highly adaptable species that has colonized the most disparate habitats with the exception of excessively closed and wooded areas and deserts.

It commonly lives in close contact with humans, both in agricultural and residential and urban areas. Its dependence on human presence has been observed to be so strong that in fact it’s not found in remote areas without a stable anthropogenic presence.

It’s a mostly granivorous species, it feeds mainly on cereals, especially wheat, but also on vegetables, fruit, and even earth worms and insects. The specimens living in the cities and other urban environment also feed on bread crumbs, fruit and vegetables leftovers. Insects in particular represent a major part of its diet, it loves to eat caterpillars, beetles and aphids. Especially the young sparrows feed pretty much just on these kind of insects for the first couple of weeks after hatching.

Like many other birds, it needs grit to help digest the toughest item that are part of its diet. This grit can be anything from stones, shells of snails or eggs, grains coming from masonry; with a preference for rough and oblong grains.

It’s an incredibly smart and opportunistic bird, they can often be observed in the outside areas of restaurant and bars – and sometimes even inside – feeding on crumb and any leftovers they spot around the tables. They even manage to get into supermarkets, flying in front of the automatic doors to make their way in.

It’s a gregarious species and the new born are keen to stay close to the nest if the environmental conditions allow it. The couples are monogamous and remain together even outside the reproductive period. Episodes of infidelity often occur on the part of both the female and the male. In any case, the couple cooperate in the construction of the nest and in looking after the chicks.

Usually at each breeding season, between February and May, the couple lays 2-3 broods of 3-5 eggs each, which are incubated for a couple of weeks. After about 14 days the chicks fly away, but for another 2 weeks they will regularly return to the nest to be fed by the parents, who are very aggressive towards those who invade their territory or come to close to the nest.

The species is studied very little, except for some contributions aimed at describing its distribution and abundance in relation to the presence of other breed of sparrows. It would be important to verify, from this point of view, which factors can decisively influence density, survival and reproductive success.