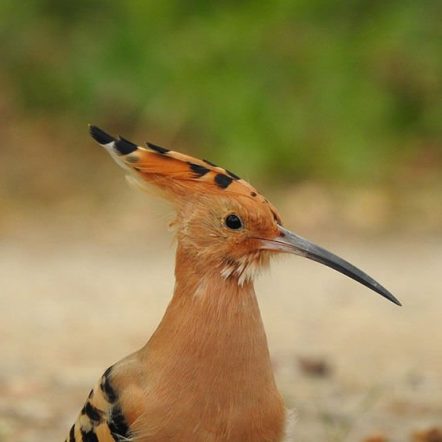 Hoopoes are attractive, instantly recognizable birds that have featured prominently in history since ancient times. There are three species of hoopoes: The Eurasian hoopoe, of which there are nine subspecies, the African hoopoe, and the insular Madagascan hoopoe. A fourth extinct species – the Saint Helena hoopoe – once inhabited the Island of Saint Helena.

Everything to know about hoopoes:

The Hoopoe is a distinctive bird. The most prominent feature of the hoopoe is its attractive crest. When alarmed, it raises its crest upright like a feathered mohawk.

Hoopoes are 25 to 32 centimetres long, depending on the species, with the African hoopoe being the smallest. Their beaks are long, thin, and curved. They have broad, rounded wings, which are larger in migratory species.

These beautiful birds are predominantly rufous-coloured. The feathers on their crests are tipped with white and black. Their wings and tails have contrasting black and white bars. Female hoopoes are slightly duller than males with fewer white markings.

Fun Fact: One hoopoe was recorded at about 6,400 metres during the first Mount Everest expedition.

Among Eurasian hoopoes, there are migratory and sedentary populations. Most species in Europe and Asia migrate south to their wintering grounds in the tropics. Interestingly, vagrant Eurasian hoopoes have been recorded in the Yukon Delta of Alaska.

African Hoopoes are non-migratory. They range from the equatorial region of sub-Saharan Africa to South Africa. The Madagascan hoopoe is endemic to the island of Madagascar.

Hoopoes need bare ground for foraging and vertical surfaces such as trees and cliffs for nesting. They occur in a wide range of habitats such as heaths, forest glades, and wooded steppes in Europe and Asia, and in the savannas and grasslands of Africa. In Madagascar, they inhabit forests, savannah, pasture, and shrubland.

These birds have become common in gardens, parks and cultivated areas like farmland, vineyards, and orchards.

Hoopoes exhibit an undulating, somewhat erratic flight pattern, similar to butterflies. They typically fly low, except when escaping predators at which times they are able to soar at great heights.

Hoopoes sunbathe by spreading their wings and lying on the ground with their heads tilted backwards. They may do this soak up the warm rays of the sun, but another possible reason for this fascinating behaviour is to rid themselves of parasites by exposing them to heat.

4. The call of the Hoopoe

Hoopoes are aptly named after their signature call. The Latin word for hoopoe, Upapa, is also onomatopoeically derived. The African and Eurasian hoopoes produce similar dual and trisyllabic “hoop-oop” and “oop-oop-oop” calls. Whereas the Madagascan hoopoe’s call is a low, cooing “rroowww” sound.

In the Himalayas, the call of the Eurasian hoopoe may be confused with that of the Himalayan cuckoo, Cuculus saturatus.

They feed on open grounds, foraging the surface, and probing the ground for burrowing insects. Although uncommon, they occasionally catch swarming insects in flight. Larger insects are beaten against the ground or on a rock surface to kill them and remove indigestible parts before eating them.

Hoopoes are solitary birds, only pairing up during the breeding season. They are seasonally monogamous, usually finding new mates each season.

Hoopoes are territorial birds. The male calls frequently to make its territory known. Brutal fights between rival birds occur often. During territorial fighting, they stab each other with their bills, occasionally blinding their opponent.

Hoopoes are cavity nesters. They nest in holes in trees or other vertical surfaces. They may lay four to twelve eggs depending on the region. The eggs are incubated for around 15 to 18 days. Female hoopoes are fed by the males throughout the incubation period. When hoopoe chicks hatch, they are covered in down feathers and start to produce feather quills within a few days.

Hoopoes have fascinating anti-predator defences when nesting. During the breeding season, the preening gland of the female and her nestlings produce a foul-smelling liquid, which they rub into their plumage to deter predators. The secretions, that smell like rotting meat also inhibit parasites and may even have some antimicrobial properties. Nestlings also shoot streams of faeces at intruders while hissing at them. These feisty chicks are also able to strike predators with their bills and wings.

Young hoopoes fledge at just over a month old and leave the nest about a week later. Hoopoes have an average lifespan of about ten years.

In Ancient Egypt hoopoes and were considered sacred and were depicted on the walls of tombs and temples.

They feature in both the Torah and the Quran. In the latter, a hoopoe known as Hudhud served as an emissary for King Solomon.

Hoopoes were symbols of virtue in Persia. By contrast, they were considered thieves across Europe, and the harbingers of war in Scandinavia. In medieval magic, the hoopoe was considered evil and sacrificed in rituals to summon demons.

Hoopoes are protected by law in many countries due to the crucial role they play in controlling pesky insect populations in croplands, vineyards, and forest cultivations.

Ironically, hoopoes are declining in intensively farmed areas, in part due to the lack of bare-ground for foraging.

Hoopoes have certainly made their mark in society, and we benefit from the services they provide for us in nature. We need to move toward sustainable practices that enable us to live harmoniously with these intriguing insectivores.