The Helmeted Guineafowl – A Bird With An Ancient And Omplex History
Share:FacebookTwitterPinterest 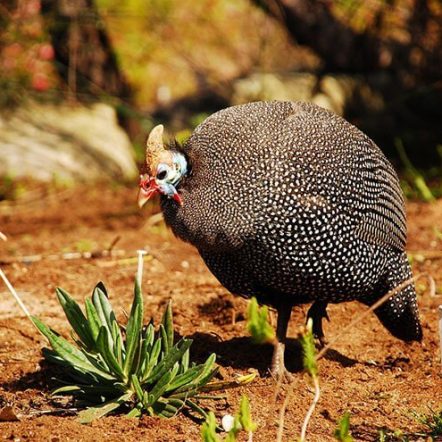 The Helmeted Guineafowl – A Bird With An Ancient And Omplex History

The helmeted guineafowl it’s bred in Europe while it’s widespread in the wild in Africa. We know it certainly not for its reputation as a pet but for the delicacy of its meat. Precisely for this reason it arrived in Europe and for similar reasons it has also made its way to the Middle East and the Americas where it’s a classic farm animal, and it’s almost never considered a specimen belonging to the “game” category.

Everything you need to know about the helmeted guineafowl:

If you are about to breed helmeted guineafowl, you should know that they belong to the genus of gallinaceous Numida, widespread in Africa, and which has several species. The guineafowl hens that we commonly raise today, they all belong to the Numida meleagris species. Among the ancient Romans, guineafowls belonging to the subspecies N. meleagris ptilorhyncha, probably arrived from northern Africa, had spread for breeding throughout the Empire’s population.

It seems that these animals disappeared from Europe with the fall of the Roman Empire so much, so that it was necessary for the Portuguese to re-import them from the African colonies and spread them to our continent, to see them around again. In this case the imported subspecies was the subspecies N. meleagris galeata. Later they were also imported to America, where they acclimatised happily and easily.

It’s interesting to note that helmeted guineafowls can interbreed with other galliformes and give life to hybrids that are in general sterile when adults – some are really special from an aesthetic point of view. We mainly know of hybrids between guineafowls and roosters, but successful crosses with peacocks have also been found.

The livery of the helmeted guineafowls, is characterized by a dark background dotted with light spots, called pearls, vaguely reminiscent of tears. The ancient Greeks believed that the sisters of Meleager, who had been killed in the course of a fratricidal war that broke out because he had hunted a boar sent by Artemis, had fallen into the darkest despair of his death and continued to weep; the pitying gods then transformed them into birds, the guineafowls, in fact, which would have brought the cries and tears of women in their song and livery.

Apart from mythology, the helmeted guineafowl has a bare head and its neck is covered with caruncles and spiky feathers. The head presents red wattles and a hornlike crest that covers a bony part (hence the name). There’s not much difference between the two sexes, only a greater development of helmet and wattles and the weight difference in the domestic ones, in fact the domestic male can weigh up 1.8 kg and the female can exceed 2 kg; while the wild helmeted guineafowl’s weight is the same for both sexes and never go over 1.1 kg. The female has a greater pectoral muscles, while the male assumes a characteristic stiff posture while walking, raising his wings from time to time. The foot has no spurs and short toes, which in the wild ones are dark grey, while in the domestic ones can be completely yellow, dark grey or black with yellow spots.

This specimen has the ability to adapt to any environment, both the original African one and in those where it has been introduced over time. Specimens have been sighted both in the prairies and in the forests, and in the steppes, scrublands and semi-desert areas.

While it’s very adaptable, the origin grounds of the wild helmeted guineafowl is to be found below the Sahara desert, where they conduct a sedentary life in warm and dry open habitats such as farmlands and savannah with few trees and shrubs.

In nature it’s a non migratory bird and therefore does not move away from the area of ​​interest. It’s gregarious and spends the night perched in trees. Outside the reproductive period, the helmeted guineafowl lives in big flocks (on average of 20-25 individuals) and always in groups it goes in search of tubers, bulbs, berries, insects and snails. This community food runs are useful not only for increasing the quantities of food resources, but also for protecting oneself from predators. Drinking also takes place in groups, especially at night.

They are monogamous birds, once chosen the partner, it will be the one for the rest of their life.

The nests are built by digging special hollows in the ground, then filled with the material they find on the ground, in order to make it a soft and safe bed. Once finished, the female will lay about 5-8 hard, shiny-shelled eggs. The eggs will be hatched for about 25 days only by the mother, the father will have the task of guarding the partner and the eggs from external attacks. Afterwards, the young will be looked after by both parents until they are finally independent. In captivity, these animals need very large chicken coops, often in these artificial environments they become very aggressive and often attack the other members of the group.

With an estimated total population of over 1,000,000 individuals, the helmeted guineafowls population status is classified as “Least Concern” on the IUCN Red List, and its trend is stable. However, even if they’re not at all threatened at a global scale, these birds suffer enormously from the loss of their habitat, they’re often hunted for food and disturbance from farmers, cats and dogs is also the cause for drops in this bird’s numbers.