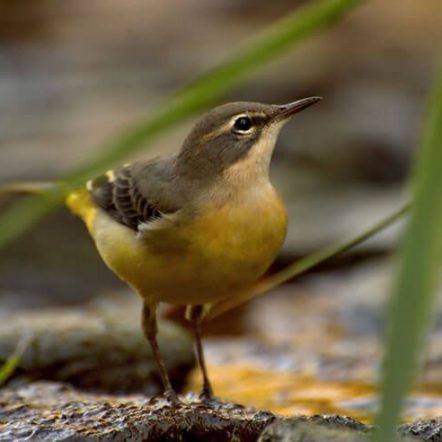 On the banks of streams and small mountain creeks, it’s not difficult to meet a striking and lively species due to the bright lemon color of the feathers and the snappy movements of the tail: it’s the grey wagtail! Unlike most species, the grey wagtail when moving on the ground doesn’t jump, but advances, walking and raising and lowering its long tail, which is constantly in motion, provoking a showy swing of the whole body.

Everything you need to know about the grey wagtail:

The grey wagtail frequents both mountainous and hilly regions and its presence is closely linked to the existence of streams and rivers which are characterised by tree-lined banks and scattered with boulders and pebbles. The high altitude does not represent a problem for the nesting of the species, which builds the nest up to 1,900 meters high. During the cold season, however, it settles at lower altitudes, where it finds food more easily.

Even if in lower numbers, the grey wagtail is also present regularly in the plains at lower altitudes. Preferably, always along waterways with strong currents and gravelly banks. It is an indicator of clean, peaceful and pristine natural streams. It catches the eye for its continuous movement of the tail and the back of the body, the roar of the water covers calls and singing, for this reason, for the exchange of information between partners and neighbours in the area, clearly visible movements are important.

Although sometimes it meets in small groups, especially in the winter dormitories between the hedges, it mostly tends to lead a solitary life or in pairs. It has an irregular and undulating flight. It loves to perch on the boulders and on the vegetation overlooking the streams; it seldom lands on trees.

The species reaches a length of about 18 centimetres by 20 grams of weight. Its peculiar feature is the long black tail with very marked white external feathers. The plumage of the chest is bright yellow, but only in the summer, while it turns towards a more tawny shade in the cold season. The back instead remains on yellow-greenish tones.

There are numerous differences that allow to distinguish the two sexes: the male has a white eyebrow and a strip of the same color, which runs from the beak to the dark grey cheek. The throat takes on blackish shades in summer and whitish in winter, while that of the female remains white in both seasons. In females, moreover, the colours are less defined and the back is a brighter green.

The grey wagtail is distributed in Europe, Asia and Northwest Africa. During the nesting in Western Europe it goes as far as Russia, while in the Asian continent it comes to cover Japan and the Kamchatka peninsula. During the wintering period, the Eurasian population moves to the Mediterranean area, even reaching distances beyond the Sahara desert, to the area of the African Great Lakes. In winter, the Siberian population opts instead for India, China, Indochina, Indonesia and New Guinea.

Constantly looking for food on the river banks the grey wagtail feeds mainly on small invertebrates and aquatic-type insects typical of lakes and waterways, which it captures by moving along the banks or chasing them with short flights. These can include ants, flies, snails, midges and tadpoles. It’s extremely unlikely that they will get close to any garden bird feeder as these foods are not part of their normal diet.

Towards the end of February, the male occupies a territory along a stream and attracts the female with a courting parade: from a high perch he descends towards the female with a slow and flickering flight, emitting a song consisting of a rapid succession of trills; on the ground, it approaches its partner, inflating its feathers, spreading its wings and tail.

The reproduction takes place between March and May. The grey wagtail nests in rock cavities, holes in walls or under bridges. Both the male and the female contribute to the construction of the nest by intertwining stems, moss and leaves. The pair is monogamous and raises an average of one brood per year, consisting of 4-6 whitish eggs with grey dots. The hatching lasts about 12 days, then the chicks remain in the nest for another two weeks receiving food from the parents.

Its state of conservation is assessed as favourable throughout the European continent. The fluctuations to which the population is subject seem to be correlated mainly with severe winters which can lead to short-term drops in population, with a reduction in density and disappearance in large areas. A further threat factor is represented by anthropogenic interventions of degradation or destruction of habitats suitable for nesting or hosting the species it feeds on, such as transformations of waterways and embankment works.

Although the conservation status is generally favourable, careful and constant monitoring is necessary as suitable habitats are often subject to forms of degradation. As we’ve seen, abrupt variations, man-made or otherwise, in water levels are often lethal, particularly during breeding. To avoid them, engineering interventions to modify and preserve the banks would be appropriate, in order to protect habitats suitable for the life of the grey wagtail and the other species that frequent them.