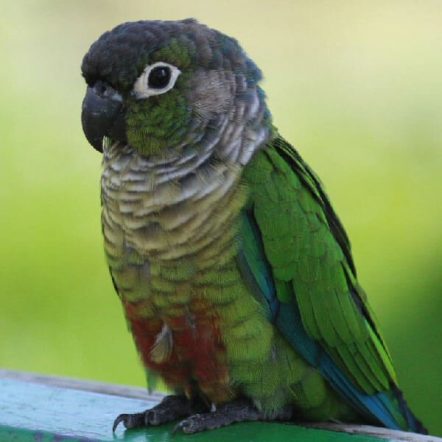 Green-cheeked parakeets are also known as green-cheeked conures. These playful parrots are popular pet choices due to their fun personalities. Let’s get to know these colorful and captivating birds a little better.

Everything you need to know about green-cheeked parakeet:

If you want to see green-cheeked parakeets outside of pet stores, as someone’s pet in their home, or your local zoo, then you’ll most likely have to head to South America. There are 4 countries in South America where these birds can be found in nature: Bolivia, Brazil, Paraguay, and Argentina.

There are 6 subspecies of pyrrhura molinae, but all of the green-cheeked parakeets can be found in the forests of these South American countries.

If you do end up searching for these playful parrots in the wild, get ready for some neck strain, as these birds live in the treetops. Not only that, but they tend to choose the tallest trees available, as that provides the most safety from predators.

The green-cheeked parakeets typically live together in groups called flocks. These flocks usually contain 10 to 20 members. When they get hungry, these green-cheeks eat mainly fruits, vegetables, seeds, and nuts. Once in a while, they may also feed on insects. They also have been observed drinking nectar from flowers, leading to speculation that they may play a role in pollination, as well.

Their colorful appearance helps these birds blend into the foliage of the trees. While there may be slight differences between the subspecies of green-cheeked parakeets, their appearance can be described, in general. Their bodies are mainly green in color, with darker gray or brown feathers on the tops of their heads, blue found in the wings, sometimes red or maroon feathers in the belly area along with maroon colored tails. Males and females are indistinguishable in appearance, with both displaying the same color patterns. Being on the smaller side for parrots, green cheeks reach about 10 inches in size when adults, and only weigh 2 to 3 ounces.

**Note: Selective breeding in captivity has led to a number of additional color variations not naturally found in the wild. Some of these variations are known as: pineapple, turquoise, cinnamon, and yellow-sided.

Green-cheeked parakeets are believed to build their nests inside hollow tree trunks in the wild. They usually lay 4 to 6 eggs at a time in the breeding season, which is around February every year. These eggs take about 25 days to hatch. These new babies will themselves reach maturity between 1 and 3 years of age.

In the wild, green-cheeked parakeets can look forward to an average lifespan of 10 to 20 years, while in captivity, they can reach beyond 30 years of age if well cared for.

Although green cheeks manage to avoid many predators by living high up in the treetops, they are not completely lacking danger. There are still certain types of hawks which may hunt them in their natural habitat. In addition, there is an ongoing crisis of deforestation in South America, which could lead to habitat crisis in the future for these birds, as the trees they live in are on the decline.

While we know a good amount of information from observing green-cheeked parakeets in the wild, it might be possible that even more has been learned about these birds through their popularity as pets. Due to a variety of factors including their abundance and availability, beauty, and most of all their playful personality, these birds have become quite popular as pets, especially in the United States.

Owners of these birds will vouch for the playful activities that these birds exhibit. They are quite sharp and quick learners. Many green-cheeked parakeets engage in playful behaviors like hanging upside down, rolling over on their backs, learning to respond to commands, and sometimes even certain kinds of vocalization, although they are considered to be quieter than other birds in the “conure” family.

It must be noted, though, that green-cheeked parakeets should not be expected to speak in the same manner as other parrots who are known for vocalization, and it is likely that many of these birds kept as pets will not end up speaking. Owners, though, truly learn to love these birds for their personalities rather than their speaking ability. The green cheeks form strong bonds with their owners, and crave attention regularly. It is recommended that they be given several hours per day outside of their cages to play and exercise.

In fact, the birds will seek play with their owners, and require a good amount of attention on a regular basis. It is for this reason that many people who do not anticipate this type of behavior and personality consider these birds to be high maintenance.

To maintain consistency with their natural diet in the wild, green-cheeked parakeets kept as pets should be given fresh fruits and vegetables daily, balanced with commercially available pellets to ensure they are receiving sufficient vitamins and minerals.

Green-cheeked parakeets kept as pets are, of course, sheltered from the threats of the wild, but there are still many things to keep in mind for pet owners. Like many other birds and parrots, green cheeks can be susceptible to a number of diseases including bacterial and fungal infections which can affect their beaks, feathers, and nervous system among other things. Therefore, owners need to be vigilant for signs and symptoms of abnormal behavior or appearance, and schedule regular visits to an avian veterinarian.

It is hard to believe that green-cheeked parakeets were at one time a sight to behold only in the forests and jungles of South America. Due to their external and internal beauty, these playful parrots have captured the hearts of so many bird lovers that they have become one of the most popular birds kept as pets. For those willing to give the time and attention these birds require, they will certainly be rewarded with a loving companion for many, many years.