The Greater White-Fronted Goose – A Goose That Thrives In Cold Weather
Share:FacebookTwitterPinterest 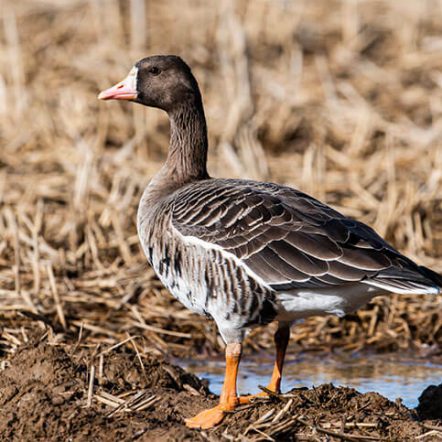 A curious white spot breaks the uniformity of a bright and orange beak, in perfect chromatic harmony with the legs: this is the greater white-fronted goose, Anser albifrons, a goose with a large wingspan, and a lover of glacial and humid environments, but with definitely different “tastes” when it comes to choosing the place to spend the winter, despite retaining a preference for coastal and marshy areas: here she is then moving into the humid and gloomy lagoons of the Mediterranean Sea.

In fact greater white-fronted geese nest in the vast tundra regions north of the Polar Circle in summer. While in autumn they migrate together, in large flock formations, to Europe, where they winter mainly on the coasts of the North Sea and the Baltic Sea, as well as in south-eastern Europe.

Everything you need to know about the greater white-fronted goose:

Equipped with a considerable wingspan – even up to 165 cm – the greater white-fronted goose measures from 66 to 86 cm. From Russia to Alaska, up to Greenland, they nests in the northernmost regions of the globe, especially among the peculiar vegetation of tundra and taiga.

A real “Achilles heel”, for a species linked to cold and humid environments such as tundra and taiga, are the abrupt climate changes taking place in the northern hemisphere of the planet. Events such as the melting of ice or the greenhouse effect could cause a decrease in the area of presence in the future. In addition to climate change, in Russia, for example, a strategic country where the majority of the breeding population is concentrated, the tundra is affected by the exploitation of oil fields. Excavation works, reclamation, changes in pasture management practices are causing a progressive degradation of wetlands such as to compromise, in perspective, their suitability for this and other species related to these environments.

In Greenland, it has also been observed that the species is negatively affected by the excessive exploitation of some areas for tourism purposes. It is a gregarious species outside the reproductive period. It feeds by walking on open areas and there is always some individual who acts as a sentry ready to give the alarm in case of emergency.

This goose owes its name to a particular morphological characteristic: the particularly evident and typical white patch that rotates around the upper jaw. There is no sexual dimorphism even if the difference between the two sexes exists since the males are larger and more imposing in size than their mates. The plumage of the body of the greater white-fronted goose (Anser albifrons) is almost entirely of a grey-brown color, even if both the chest and the abdomen are not uniformly colored as both feature black bars and streaks; the legs and feet of these specimens are of a wonderful bright orange color and, finally, the beak shows a color that goes from pink to orange.

Among the aquatic birds, the specimens of greater white-fronted goose are among the noisiest as they produce sounds that to the human ear are very similar to a hysterical and particularly loud laugh. This particular feature of theirs has therefore given them the nickname of “Laughing Geese” and they are also easily recognizable during flight because of this particular and distinctive sound they emit. It’s easy to spot it in flight and more difficult when it is posed due to its remarkable camouflage, even if the dimensions help to identify it. The flight is powerful, straight, fast enough when in formation (often “V”).

The greater white-fronted goose is a migratory species that extends its nesting area in the areas close to the arctic, north of the 60th parallel; in the Palearctic Region the range is located in a continuous strip from the Kanin Peninsula to most of eastern Siberia. The populations that winter in Europe migrate in a south-west direction and reach three distinct areas: north-western Europe, central Europe and territories near the Black Sea.

In Italy it is a regular migrant and locally winters mainly in open cultivated areas in the vicinity of large coastal wetlands of the upper Adriatic coast. The first groups presumably arrive in the peninsula from northern Russia already in November, but the most consistent arrivals take place in January and February.

As with most geese, the greater white-fronted goose’s diet is mainly vegetarian but, overall, varied: it feeds on sprouts, berries, seeds; but also on mollusks and snails. Estuaries, marshes and grassy fields are the environments it prefers to look for food.

The species is gregarious and not at all shy: the greater white-fronted goose in fact loves being in big groups of its similar, with which it grazes on meadows and cultivated land, in search of food.

Once the winter has ended, the nest is built on a small rise in the ground using the surrounding vegetation. Usually the pairs nest in isolation, but sometimes they can form sparse colonies. During the year it has only one brood and the laying of the eggs takes place between the end of May and June. The 4-6 eggs laid are incubated by the female alone for 27-28 days. The male is limited to supervisory duties. The chicks are precocious and are looked after by both parents, they’ll become independent at the age of 40-43 days.

The greater white-fronted goose’s population that spends the winter within the European Union is estimated at 930,000 individuals. The species appears in great increase in the territories of European Russia, where currently between 60,000 and 70,000 individuals nest. During the two decades 1970-1990 the population increased significantly, while the following ten years (1990-2000) recorded substantial stability.