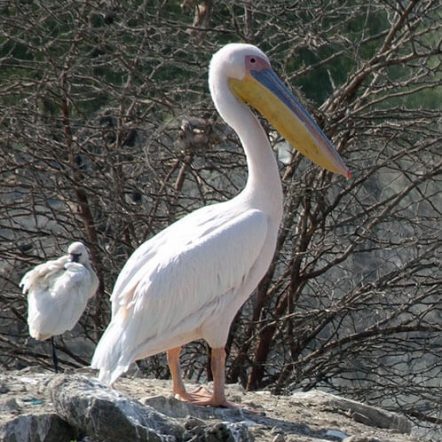 The great white pelican is an imposing bird; its huge beak has a bag of skin attached to its underside which is used to collect the fish it has caught. The decreasing numbers of this species is mainly due to human related activities. While once it could happen that pelicans came to us occasionally, coming from southeastern Europe, nowadays for the most part they are probably individuals who have escaped captivity.

Everything you need to know about the great white pelican:

The great white pelican is quite a massive bird. But despite being a heavy bird, its flight is easy thanks to the air pockets it has under the skin. This helps it to keep flying for long hours and distances. Its main feature is the very long beak with a kind of hook with a curved shape on the upper edge. Underneath the beak, a large bag extends from it, which is formed by the muscles of the tongue.

It has the ability to drink salt water and turn it into fresh water to stay hydrated. The tail has a square shape and is relatively short compared to its body and has wings that are wide enough to allow it to fly smoothly. On his legs it has webbed fingers with a membrane that allows him to swim and move easily in the water.

Its behavior is territorial and gregarious at the same time, it lives, flies, hunts and reproduces in groups. It’s very communicative and uses a variety of songs to communicate with each other. For example, to attract a mate or to warn the group of some immediate danger. It is a diurnal bird, for this reason it devotes itself to fishing during the day, usually in the morning or before dusk, spending, then, the rest of the day bathing and interacting with other specimens. In extremely torrid periods it opens its beak and spreads its wings to cool down and fight the heat.

The great white pelican has a predominantly white plumage with light brown shades on the tips of the wings. Apart from the colouring, what most distinguishes this species of birds it’s the size of their peculiar beak. The Pelican can reach a length of 180 cm with an extraordinary wingspan and the long beak (which measures on average 40 cm) has a large distinctive pocket with a capacity of about 13 litres.

Present in winter in sub-Saharan Africa and north of India, the great white pelican migrates to Eastern Europe and Asia for nesting, stopping on the banks of the Danube delta, the Caspian Sea and the Black Sea. Some African populations are resident all year round and never endeavor on any migration.

The favorite habitats of this bird are lakes and inland seas. To nest it needs banks rich in reeds and, for fishing, shallow pools of water.

The great white pelican feeds mainly on fish, which it catches with an ingenious technique: several individuals, usually a dozen, swim together in a circle hitting the water with their wings and beak in order to push the fish into shallow water, where they are trapped in the pouch under the beak that the white pelicans use as a sort of net and which can hold up to 13 litres of food! This strategy is so successful that the bird spends only one hour a day fishing and can dedicate the rest of the time lazing around and caring for its plumage.

The technique it uses for the capture, however, requires some time, in which other birds can take advantage of the great white pelican and the steal the fish from it. For example, the cheeky seagull pecks the pelican on the head to confuse it, so that it can steal the fish when it opens its beak, but at same time, the pelican itself steals the fish from other pelicans, so that should settle it!

The great white pelican is a very social bird, forming large colonies in which it reproduces, lives and migrates. During the mating season, which in Europe falls in spring and in Africa happens throughout the year, multiple males perform simultaneously spectacular courtship dances. The female, after choosing a mate, has the task of selecting the place to build the nest.

On average, the brood consists of 2 eggs, which hatch after about 1 month of incubation. The young will then leave the nest after 65-75 days and about 64% of the young will reach sexual maturity at 3-4 years of age.

In 2018, the IUCN’s Red List classified the great white pelican as “Less Concern”. This bird is not threatened on a global scale, in fact there are about 75’000 breeding couples in the African population, however the European colonies are slightly decreasing in numbers; as it often happens, men is mostly responsible for it, in fact the great white pelican is sought after for his beak pouch and for its skin and fat. Also, if disturbed, for example by humans or large mammals, it can leave the nest to escape to safety, leaving the offspring defenseless.

Great white pelicans are also very sensible to the pollution of their environment and the disappearance from it of their sources of food because of intensive fishing practices. These reasons lead the great white pelican to forced longer migratory trips, during which they also risk colliding with the power lines.

Unfortunately, in addition to all these threats, the African colonies, when they are in the water, concentrated in fishing, they can also end up victims of crocodiles that can suddenly bite them, and when on land, they can be attacked by jackals and even lions.