The Golden Oriole – One Of The Most Beautiful Species Of The European Birdlife
Share:FacebookTwitterPinterest 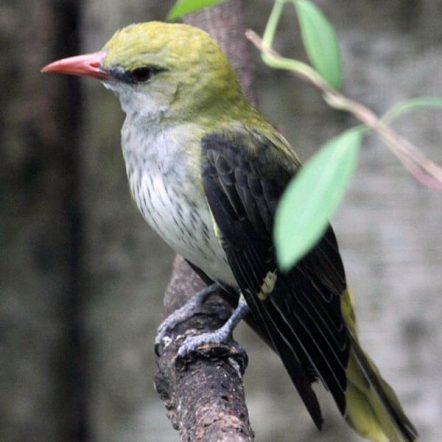 The Golden Oriole it’s a bird with an exotic appearance, its closest relatives live in the African and Asian tropical areas. It has reserved habits and despite its showy yellow-black plumage, it’s not easy to discover this bird in the foliage of the trees bathed in light. His melodious flute singing, however reveals its presence. The Oriole stays in Europe only for three months a year, for the rest of the time it lives in the equatorial forests, next to its sedentary relatives.

Everything to know about the golden oriole:

The Golden Oriole (Oriolus oriolus) is a passerine bird and member of the Oriole family. The name derives from the Latin aureolus, which means golden, in reference to the yellow color of the male’s feathers. It’s one of the best known birds for its flamboyant plumage and melodious song. The male is in fact a bright yellow color, often tending to orange, with black wings. The female, on the other hand, is an olive green color with a grey-streaked belly. It has an agile flight with which it moves from one branch to another continuously, emitting a long sequence of calls.

The oriole lives mainly in pairs, on the low branches of trees and in the undergrowth. Its habitat is very extensive, and goes from Europe to Asia and Africa. If attacked, the Golden Oriole defends its nest strenuously even from the attack of predators much larger than him.

The Golden Oriole is one of the most striking birds in our skies, thanks to its golden yellow livery. The black wings and tail give even more prominence to its beautiful coat. Its dimensions reach 27 centimetres in length. The color of the plumage can vary in intensity and yellow can also tend to orange sometimes. The female, very mimetic, has an olive green coat with a brown beak. The juveniles will have the same colours and shape of the females.

To be difficult to identify, he rarely sings from the same branch, constantly moving to confuse those who have heard him. Its flight is agile and quick, even during migrations, when he prefers to move at night to be more undercover. He does not like coniferous forests, he prefers wooded areas, but also isolated and inaccessible areas that are near inhabited communities. Its is a solitary bird and it lives as a couple at best. Only after nesting is it possible to observe family groups of Golden Orioles still united.

The distribution area of ​​the Golden Oriole extends from Portugal, Spain and France, Italy to Poland, Russia, the Balkans, Turkey and western Asia to the Caucasus up to Mongolia and China. Spring migration can happen during the day, but, given the reserved and discreet nature of this bird, they usually prefer to migrate overnight when they go spend their winters in central and southern parts of the African continent. When autumn arrives, they migrate back, across the eastern Mediterranean, where they know there are fruits to be found.

Wide open deciduous forests and orchards are their favourite habitats in western Europe, as well as river forest and large gardens. In eastern Europe they can live in coniferous forests, they generally avoid treeless habitats. In their wintering habitat they go through numerous environments, from semi-arid areas to humid forests, high forests and savannahs. Golden Orioles have an extremely wide range with large and seemingly stable populations.

These birds love to feed on insects; but they also integrate their diet with other food of vegetable origin, such as buds, berries, fruits (especially apple and hawthorn, the latter is sought before reproduction to accumulate energy) and flowers: very limited and sporadic is the contribution to the adult’s diet represented by insects and small invertebrates, as well as by their eggs and larvae.

The breeding season is announced by a frenetic activity made of chases and fights around the trees. The formation of the pair occurs after a courtship made by the male, who closely follows the female in all its movements among the vegetation. Once the coupling has taken place, they chose the site where to build the nest, generally at the end of a branch of a tree, far from the trunk and quite high. It’s up to the female to build the nest in the shape of a “hammock”, formed by a dense texture of leaves, grass, twigs and earth. This structure is very solid and can be used for several years.

The choice of the territory where to nest is not random, but carefully picked. The Golden Oriole in fact looks for areas where both water and food are readily available, that’s near streams, orchards or vineyards. Once it find these spaces, it’s easy to see them nest in that same area every year.

During the year, it usually delivers a brood, exceptionally two. In May 3-4 eggs are laid, the incubation of which is carried out mainly by the female for 16-17 days. The chicks are nestlings and are cared for by both parents; at the age of about 2 weeks they leave the nest, but remain in the company of their parents until it’s time to undertake the migration.

At the moment the species in Europe is considered to be in a favourable state of conservation and it’s not threatened. It’s a species well known as far as distribution goes, but poorly studied when it comes to its ecology and reproductive biology, and informations on the main demographic parameters are missing. In Europe, densities vary greatly with changes in habitat, altitude and geographic location.

It’s undoubtedly desirable to carry out large-scale monitoring activities, also in consideration of the fact that the species was subject to a slight overall decline in the European Union in the decade 1990-2000, in order to draw indications from a management and conservation perspective. General management directions include the need to maintain and restore lowland forests and valley floors, rich in oaks and fruit trees.