The Goldcrest – King Of The Birds
Share:FacebookTwitterPinterest 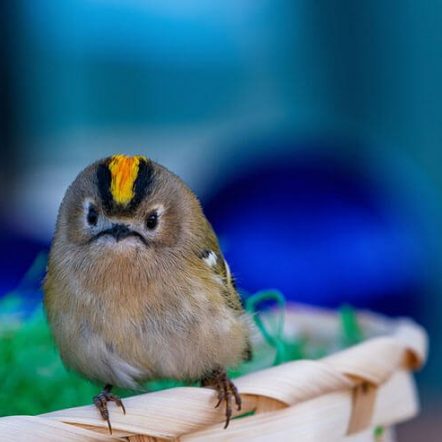 The Goldcrest – King Of The Birds

by Raeesah Chandlay4 months ago

Awarded the title “king of the birds” based on an old folktale, this tiny bird is a member of the kinglet family. Goldcrests are native to Europe and Asia. There are fourteen recognized subspecies, spanning continental Eurasia and the Macronesian Atlantic Islands.

Everything You Should Know About The Goldcrest:

At a mere three inches long, the goldcrest is one of the smallest European birds. They appear similar to warblers, firecrests, and ruby-crowned kinglets. The goldcrest is a plump little bird with a rounded belly. Its plumage is light yellow-green above and dull buff below. It has greyish-black and olive flight and tail feathers and white bands on its wings. The pointy black bill is short and sharp, and the eyes are stark black bordered by a white eye-ring.

The most distinguishing feature is the bright yellow crest with black stripes on either side. It has thin, brownish legs. Its feet are small, and it has a long hind toe adapted for perching vertically on branches. It also has furrows under its feet, providing a rough surface for gripping the thin conifer needles-like leaves in its breeding habitat.

The male’s crest has an orange tinge. Females and juveniles are slightly duller than males, and the young lack the striking crown for which this species is named.

Goldcrests have a distinctive, erratic flight pattern characterized by fast, whirring wing-beats and sharp, jerky movements. This is believed to help them confuse and evade predators. Most subspecies have marginal differences in plumage shade. The Canary Island species, however, are more distinctive. They have black foreheads, pinkish-buff underparts, and darker wings.

Fun fact: The Latin name stems from an old folktale about a contest among all birds to see which could fly the highest. The eagle was close to winning when a small bird hidden in its feathers emerged and flew to the greatest height. The eagle was too exhausted to catch up and was defeated. The small bird in the story was believed to be the goldcrest and was awarded the title “king of the birds.”

A fossil of an extinct kinglet species, the Regulus bulgaricus, dates back up to 2.6 million years ago in the Pleistocene epoch. It is believed to be the common ancestor of the goldcrest and the firecrest.

The goldcrest has high-pitched zee zee zee contact call. The male has a signature courtship song, which he sings in a high pitch while foraging.

Goldcrest males also have territorial songs. Variations in the songs of Micronesian populations have been used in sub-species identification, and to study the distribution of goldcrests across the Islands.

Goldcrests are diurnal birds. They are highly energetic and exhibit a distinctive rapid flutter, characterized by sudden sharp directional changes while hovering. They are often seen hopping about tree trunks, branches, and twigs.

Studies reflect that goldcrests can maintain their body temperature during extreme winters by roosting collectively at night. Two or more birds huddle together among leaf litter or in snow holes to keep warm. Research suggests that this may be a more efficient way to conserve energy than lowering their body temperature and inducing hypothermia like other small passerines do. In addition, they also rely heavily on fat reserves, especially during the migration.

A Baltic study showed that the migratory populations in the north and east increase their fat reserves prior to the winter migration, whereas the sedentary southern populations do not.

Goldcrests are curious, inquisitive birds. Migrating birds often take to ships or other human habitations along their route, especially during adverse conditions. They exhibit little fear of humans and often forage around them in search of food. During winter, goldcrests form small mixed-species flocks with tits, warblers, and other species. These flocks establish winter feeding territories, which they defend against other groups.

Goldcrests have an extensive range across Eurasia, from Iceland and the Macronesian Islands across the Palearctic to the far east. The various subspecies occupy different parts of their range with considerable overlap.

Among the goldcrests, there are migratory and sedentary populations. Birds in the northernmost and eastern parts of their range fly south for the winter.

Kinglets are insectivores. They prey on small, soft insects, spiders, and other invertebrates. Common goldcrest prey includes caterpillars, flies, springtails, aphids, and spiders. They also eat the cocoons and eggs of insects and spiders.

During winter, kinglets forage in small mixed-species flocks that often include tits and warblers. They usually catch their prey in flight while hovering but may also forage on the ground and in trees, especially on the underside of branches and leaves. On occasion, they may lap up sap or nectar from flowers and broken twigs.

Fun fact: Goldcrests have been found entrapped or dead in spider webs. They were caught while trying to pick off trapped insects.

Goldcrests are monogamous birds. The male sings while foraging, hopping about, and making bowing motions towards the female while raising its colorful crest. Goldcrests nest in coniferous trees. They build their nests out of moss, twigs, cobwebs, and lichen and line them with feathers and fur. The nest is a well-insulated triple-layered cup.

Females lay between six and thirteen eggs depending on the subspecies and region. The female incubates the eggs while the male tends to her and brings her food. The incubation period lasts up to 19 days, and the nestlings fledge around 20 days later. The nestlings are cared for by both parents.

Trivia: Goldcrests have a high adult mortality rate and a short average lifespan of eight months. This is one of the shortest lifespans of any bird species.

The main predator of the goldcrest is the Eurasian sparrowhawk. They are also preyed upon by merlins, tawny owls, and long-eared owls. The erratic flight patterns and jittery movements are believed to be evasive maneuvers to help them avoid predators. Goldcrests are hosts to flea, louse, and mite species.

The goldcrest is a stable species with a massive, expanding range, and healthy population size of up to 200 million individuals. The main risks they face are adverse conditions during harsh winters that result in severe population declines. The difficulties that winter brings may affect both sedentary and migrating birds. Survival during winter is also dependent on the availability of food. Populations impacted by high winter mortality rates can take years to recover. But once recovered, they tend to expand rapidly. Goldcrests are listed as “least concern” by the IUCN.