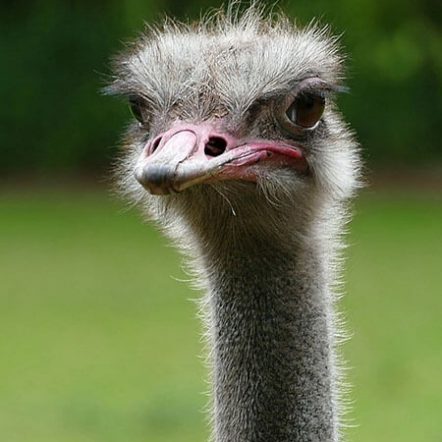 by Federico "Fred" Fiorillo3 months ago

The oldest fossil of animals related to the ostrich, dates back to over 55 million years ago. Since then, this large bird has been plowing the savannahs not flying, but running! The ostrich is an animal that we all know, at least for its fame, but not everyone has had the good fortune to be able to admire this very funny looking bird up close. In reality, even if it may seem in some ways nice, the ostrich is a bird that can become very dangerous so having close encounters with it is not always pleasant and fun!

Everything you need to know about the ostrich:

The ostrich is the largest and heaviest living bird and, like all species of the order to which it belongs, it has lost the ability to fly. Despite its size, the ostrich is the fastest running bird and can easily reach 70 km/h over short distances. Its large and powerful legs allow it to make great leaps to escape from dangers and its foot, evolved and adapted to running in the savannah, with only 2 toes to reduce contact with the ground and increase speed.

Its considerable height makes it an animal suitable for life in the plains, thanks to its point of view as a sort of “observation tower”: moreover its view is also very acute and allows it to see up to 3 km away. The eyes are very large and have long lashes that protect it from the dust of the savannah. The ostrich egg is the largest egg in the world: it is equivalent to 24 chicken eggs, has a weight of about 1.5 kg, a diameter of 20 cm and a very hard and thick shell. The ostrich to camouflage lies crouched in the savannah with its neck stretched out and this particular behavior probably gave rise to the myth that ostriches hide their heads in the sand.

In addition to its considerable size, what is immediately striking in the appearance of the ostrich is its long neck and the slightly dull expression, with a beak that looks like the one of ‘Donald Duck’. And in fact, this animal certainly does not shine for intelligence and tends to react with excessive fear to every slightest external stimulus. Its eyes are very large, highlighted by thick lashes that protect the eye sockets from the dust and wind of the savannah. The legs have no feathers and this allows it to not accumulate heat during the run.

The ostrich has 4 fingers, two on each leg, with a longer finger that is also equipped with a flat nail to increase the spring during quick escapes and another shorter to maintain balance. In each group of ostrich (which are rather large) there is a very complex hierarchical order, with a dominant male, a dominant female and other reproductive females. It is an animal that spends the whole day in freedom, scouring the terrain in search of food.

Every now and then he takes a break to perch and gently cleanse himself with its beak. Its height and fearful temperament lead him to always be alert and in case of danger it is always the first to sound the alarm, safeguarding the safety of other animals as well. It loves water and as soon as it sees a puddle, a pond or a swimming mirror, it cannot resist the temptation of a nice bath.

The ostrich lives throughout a vast area that crosses Africa between the 10° and 20° north parallel. It’s also present in eastern Africa in Tanzania and it can be found also in South Africa, Angola, Namibia and Botswana. Its favorite habitat are the African savannahs characterized by short vegetation and a semi-desert climate.

The ostrich is mainly an herbivorous bird, but is willing to eat whatever is available if necessary. Like all birds, it has no teeth, so it swallows its food without chewing and grinds it into its large and very muscular stomach.

Grass, seeds, small invertebrates and pebbles are his favorite meal. Ostriches gulp large quantities of water, especially young specimens (about 10 litres per day) and must always have fresh and clean water readily available.

The sexual maturity of an ostrich comes around the 3rd-4th year of age and varies according to the sex and the subspecies to which it belongs. Two weeks after the start of the mating season, the female will lay 1 egg every 2 days weighing 1.5 kg each. The place where they do so is usually a natural depression in the ground or a hole dug by the male. During the day it is hatched by the female, while at night it’s covered with sand. The mating period lasts for about 5 months, during which the dominant male mates with all the females of his group. Each female lays eggs in the same nest for a total that can go from 10 to 40 eggs. The hatching period goes on for another 42 days until the first chicks begin to peep out.

In the IUCN Red List, the ostrich, is still classified as Least Concern, however its population is in rapid decline, not only because of the reduction of its habitat but also because of the hunting that this bird suffers. Already from ancient times its meat was considerer a delicacy and its plumage was sought after as an ornament in fashion and, unfortunately, too often, that’s still the case. Even its eggs are not left alone and are plundered for collection purposes, this and the factors already listed are the reasons why the ostrich is facing an ongoing decline in population over the last 50 years.