The Bullfinch – A Bird With a Passion for Music Covers
Share:FacebookTwitterPinterest 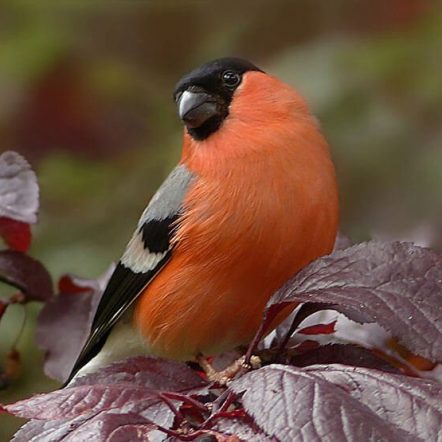 The Bullfinch – A Bird With a Passion for Music Covers

The Bullfinch is the jewel of our woods: the bright colours of the male contrast with the elegant sobriety of the female. However, it is a discreet bird, which does not like to show itself in the open. Its short, sharp-edged beak is a great tool for detaching buds, breaking shells and peeling seeds. During the cold season the species can also be observed in more inhabited areas. Today, however, perhaps due to mild winters with little snow, the number of winter guests getting closer to men has decreased.

It is not a “territorial” species, nor does the Bullfinch like to attract particular attention. Its appeal is mainly addressed to individuals of the opposite sex. The courtship ritual is extraordinary, during which the male courts the female with delicacy and grace, accompanying her whistling with a little dance. Individuals usually travel in pairs, only rarely in large groups. It can also get used to the presence of man and is known for its ability to learn: in fact the Bullfinch has a real passion for music covers and it’s really easy to teach these birds short melodies!

Everything you need to know about the Bullfinch:

The scientific name is Pyrrhula pyrrhula, famous as early as the 17th century, this little bird is a talented sound imitator and has been bred for centuries for its extraordinary ability to learn a large number of motifs and reproduce them flawlessly!

But there’s more: according to research conducted by birds behaviourists, these birds would be able to modulate their melodies in the same way as humans. And when someone interrupts them, they do not simply resume from the beginning, but start singing from the point where they left off. According to the study they would even be able to divide the melody into smaller units, made from 4 to 12 notes. In short, with excellent singing and calculation skills: success is guaranteed for these little and nice musicians!

The adult male has grey shoulders and back with and a completely black upper tail. The wings are black with an evident white and grey bar on the inside. The top of he head, the area around the eyes and a tiny bib are black and so is the beak. Throat, cheeks, chest, abdomen and hips are orange-red. The legs are grey-black.

The Bullfinch can be seen throughout Europe, Asia and Siberia, its natural habitat is in parks, gardens, cultivated areas, mountains, hills and mixed forests. Although very resistant to cold, this specimen tends to move to the plains or at lower altitudes, during the winter. He calmly gets used to the presence of man, even if he tends not to expose himself too much. Once the male chooses the female, he will stay with her forever, they do not tend to separate, in fact, this specimen moves mainly with the partner, only in exceptional cases as part of larger groups.

Bullfinches feed on a wide variety of seeds, even those with a more robust shell, which they can easily open with their strong beak. They also love vegetables such as broccoli, berries such as firethorns and hawthorn, while in the reproductive period they also look for small insects and larvae to feed their young.

The breeding season goes from April all the way through to August. The brood normally has between 4 and 5 blueish eggs with red-violet and black spots on. The female will hatch two or three times a year for about 2 weeks each time. Both parents will take care of the chicks, which show an obvious brownish livery as soon as they are born. The nursing time of the offspring generally lasts 16-17 days. The species is distinguished by strictly monogamous habits: once formed, the couple hardly splits.

Starting from the mid-1960s, the populations of Bullfinches seem not to have undergone dramatic transformations both in terms of numbers and in terms of distribution in most of its European range. Small decreases alternated with small increases occurred, but always limited to a local level. The conservation status of the Bullfinch is therefore assessed as favourable, both in the European Union and on the rest of the continent. The highest densities in Europe are found in correspondence with dense shrubs, where 20 pairs per square km can be reached. In forest environments the detected densities are constantly decreasing.

From the point of view of habitat management, the maintenance of the undergrowth in forest environments and of hedges and rows in hilly agricultural contexts would be particularly favourable to the species. Finally, interventions for the creation of new wooded areas would be of great benefit for the Bullfinch that would allow the creation of “ecological connections” between different areas of presence of the species that currently host isolated populations.