The Budgerigar – A Sociable Bird That Loves To Sing
Share:FacebookTwitterPinterest 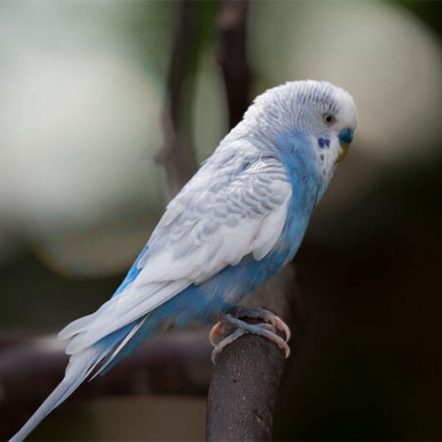 The Budgerigar – A Sociable Bird That Loves To Sing

The budgerigar is a bird native of Australia and belongs to the parrot family. This big talker, with its brightly colored plumage and curved beak, is today one of Europe’s most loved pets. in its homeland, the budgerigar lives in flocks that can count as many as 2000 individuals. So, it’s not a surprise that also in captivity it doesn’t like to be alone. If you plan to adopt one, it is good to consider purchasing at least two, if not more. It is a lively bird, which lives well only if in constant contact with other specimens. It has a very distinctive chirping and body language, and together with other budgerigars it offers a truly fascinating sight.

Everything You Need To Know About The Budgerigar:

The budgerigar is a great company bird. It is highly intelligent, sociable and active. The budgerigar does not sing, but emits only a chirp, neither unpleasant nor melodious. It easily adapts to the presence of man and that is why it’s one of the most favorite breeds among birds. The budgerigar offers to its human a lot of satisfactions (not obtainable with any other cage bird): it looks for the cuddles and the company of the owner and also of his family members. Of those who naturally take care of him, it has the habit of making a few free flights around the room every now and then, landing on the fingers or shoulder of the persons known and dear. These birds need care and attention in order to grow at their best and establish a relationship of trust and empathy with their owner. If the goal is to teach them to speak, it is important to make their voices known, for example by telling stories.

Budgerigars can be easily tamed but need an initial period of tranquility to be able to adapt to the new environment. A couple of weeks of adaptation, before starting to train the budgie, should be enough to make him relax and feel comfortable. At the beginning, you have to approach its cage with slowly movement, with caution, avoid touching it or making loud noises, so as not to upset it. Every day it must be provided with water and food: in this way a relationship of trust begins. Later, with patience and constancy, you must call the budgerigar by name, teach him a song and encourage physical contact.

The budgerigar reaches 20 cm in length. The plumage has different colors (blue, green, yellow, grey…). Today there are different varieties of color and mutations such as green, blue, grey, purple, opaline, cinnamon, albino and many others. There are characteristic waves around the eyes, on the head and on the neck, hence the name of “undulatus”.

To recognize the sex of the bird it is necessary to observe the wax above the beak at the level of the nostrils. If it’s blue it’s male, brown it’s female, this is distinguishable after 6 months of age as the color of the wax in young subjects is pink and can still change. It can live on average 10 years. Young budgerigars (up to about 12-15 weeks), in particular, are easy to identify thanks to certain characteristics, they don’t have the white ring around their eyes, these looking large and black. After this age, the feathers change to give way to the adult plumage. The color of the wax of the young specimens begins to acquire the final color. Both sexes develop a white ring around the eye.

In the wild, the budgerigar lives throughout the Australian continent with the exception of the Cape York Peninsula, and is at home both on semi-desert grasslands and in forests. It tends to be rarer in coastal areas. There are budgerigars colonies in Brazil, Colombia, South Africa, and even in California and Florida, but their scarce consistency has no relation with the large number of specimens escaped from captivity in these countries.

The budgerigar has a small beak that is particularly tilted forward, which greatly limits the size of the seeds it is able to eat. In the wild the preferences of this small birds go towards small, hard and mature seeds. The main diet of the budgie bred in captivity are small seeds (white and red millet, canary seed), which it also eats unripe, green vegetables, flowers, buds and fruit. Especially when there are chicks to feed, it also integrates its diet with larvae and worms that it finds in the ground by digging with its paws. It is important to provide a fruit salad that is possibly not too sweet and green leafy vegetables.

The breeding season depend on the presence of food, so it generally coincides with spring-summer. The adult female (at least 10-11 months old) creates the nest in the tree trunks where it lays 4-8 eggs which she hatches for 17-20 days. The young will be fed by the mother for the first 4 weeks of life, until they leave the nest: from that moment on, the father will take care of their weaning, which will take, on average, 2 more weeks. In captivity it is better to avoid breeding in colony as the females are rather territorial and do not tolerate interference during this phase of their life.

Breeding budgerigars is a fascinating experience but requires in-depth knowledge of birds and their biology! At least a few years of experience with parakeets. It’s also necessary to first consider whether there is enough space available to house the offspring.

Despite the remarkable and dramatic changes that happened across many areas of Australia the budgerigar managed to survive and thrive with the help of increased water sources thanks to the constructions of new dams. As we said, feral cats prey on budgerigars, but other threats are intensive animal farming, wild bushfires and extreme temperatures, all causing the destruction of the budgerigar’s feeding grounds.