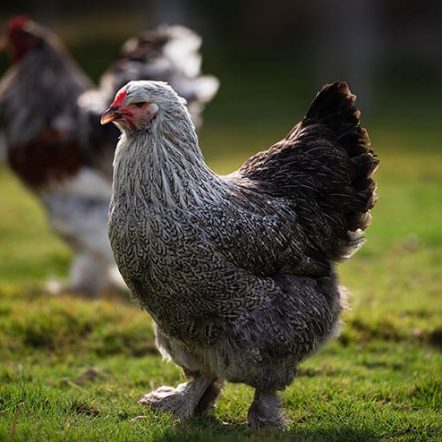 The Brahma chicken is an Asian breed of controversial origins. Many people, because of the name given to this breed, believe it originates from India, others from China. Most likely it comes from a cross made in India between the Cochin (a Chinese breed) and the Serama (a Malaysian fighter breed). In the mid-19th century it was first imported to the United States and from there to Europe, where it was subjected to many crosses with different breeds (Cochin, Malines, etc.) which consequently altered its shape and size, and so the original breed. has now disappeared. This chicken is a giant, rustic and suitable for any environment, due to its size and the beauty of the plumage it is often bred for ornamental purposes.

Everything you need to know about the Brahma chicken:

An important aspect of this breed are the colors and patterns of its feathers. Thanks to its wide diffusion due to its beauty, innumerable patterns and colors have been created over time. When it appeared in England in 1853, the Brahma chicken didn’t arouse as much astonishment as its sister, the Cochin, in 1847, since breeders, were already accustomed to the sight of colossal chickens. In spite of this, the new breed spread rapidly as it turned out to be a bit superior to the Cochin in terms of economic requirements, in fact its flesh is better, this, added to the prerogative of the Brahma chickens to show themselves rather more voluminous than her sister, contributed to the rapid spread of the new race.

The Brahma is a breed with an affectionate and trusting character towards man; a real gentle giant and it can easily become a perfect companion animal. They are quiet, peaceful and tolerant animals: suitable for living together with other quiet breeds and they coexist well even in the presence of other males.

The Brahma chicken is very large in size, with a rounded, horizontal, deep and wide trunk. The chest is wide and deep and the belly wide and full, with soft and compact feathers.

The head is rather small but broad with a large skull which is prominent on the eyes. Strong and curved beak, yellow in color with dark streaks on the top. The eyes are large, round and sunken and orange-red in color. The crest is pea-shaped and formed by three straight lines of small rounded points, higher in the center. The face is red and smooth. Small, well rounded wattles, long red earlobes. The neck is slightly long and well arched. The wings are relatively small compared to the size, carried rather high, never drooping, the tail is of medium size, full and open, carried high as well. In the hen the tail seen from behind is a little open in the shape of an inverted “U”.

The legs are strong, well feathered and rounded. Yellow tarsi with four straight fingers. Tarsi and middle and external fingers are abundantly feathered. The Brahma chicken’s skin is white. The plumage is abundant, smooth and adherent to the body, and its made of large feathers. The bone structure is thick and there are many varieties of color and patterns. Generally the hens grow the tail immediately, and it is closed, already at two months they can be recognized. Males, on the other hand, at four months still have a very open tail, and it is barely coming out. In this way, sexing can be identified within a few months, without necessarily waiting for them to become adults.

Just like every other bird, a well-balanced diet and the right amount of water is necessary to improve their productivity. Brahma hens for egg-laying will benefit from feeds that are abundant with calcium and high in protein, and also eating greens will help increase their productivity, improving the number of eggs produces and the schedule of their laying. The Brahma is a breed that excels in foraging, therefore, they’re able to feed themselves quite well, however, this is not enough and other types of feeds need to be given to them.

The eggs are surprisingly small compared to the size of a Brahma hen and are laid in small quantities with a minimum weight of about 60 grams; however, the chicks are born strong and grow rapidly (overall, however, during the whole development, the specimens of this species have a slow growth; a rooster, in fact, can continue to grow even up to one and a half years of age, despite an overall life expectancy that rarely exceeds 5 years). The production of eggs is not high, however, to compensate, they produce eggs throughout the year.

The conservation status of the Brahma chicken is indicated as “recovering”, especially because this breed takes so much time and effort to raise.