The Blackbird – A Singer In A Total Black Look
Share:FacebookTwitterPinterest 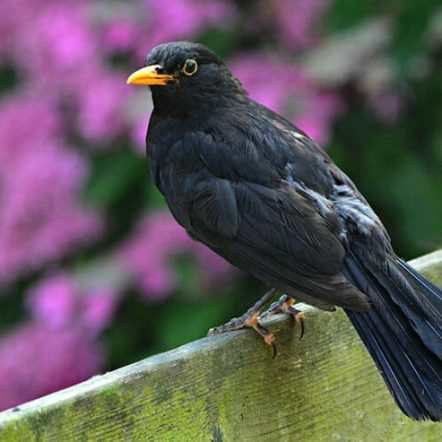 The Blackbird – A Singer In A Total Black Look

With its melodious flute song, which sometimes resounds already in January, the blackbird is one of the first heralds of spring. He likes to sing from exposed places, such as rooftops or treetops, so that his singing can be heard from far away. The final tune, gentle and subdued, is muttered with closed beak and resonates like a distant echo. Once the blackbird was an inhabitant of dense wooded area, with plenty of undergrowth. Only in the course of the last hundred years it moved en masse to urbanised areas and cities, so much so that today it has become one of the most frequent and widespread nesting birds in Europe.

Everything you need to know about the blackbird:

The blackbird is a diurnal bird. It migrates seasonally in autumn or winter for variable distances between 800 and 2000 km. Females seems to tend to migrate more than the males specimen when autumn arrives. It usually flies low close to the ground and often for short distances, with slow wing beats. Over long distances, the flight is direct and slightly undulating; this bird is able to fly long distances during migration and travels in flocks at night.

These birds often take sorts of “sun baths”, flattened on the grass or on the warm ground, with their beak open and the head tilted, spreading their wings and tail.

Victim of the degradation of the natural habitat due to heavy deforestation the blackbird has approached the houses and now lives on the doorsteps of our homes, where these birds have learned to benefit from the leftovers of bread or fruit left by men.

blackbirds are territorial birds and vehemently defend their territory, especially in urban areas where each couple has little space. Females can also fight to defend a good nesting site.

The male of the blackbird is up to 25 centimetres long and usually has a completely black or dark brown plumage. The beak and eye contour are yellow to orange in colour, while the legs are dark brown. The female, on the other hand, has smaller dimensions, with a length that can range between 15 to 20 cm and a dark brown color. The throat in his case is more clear and striated.

The blackbird is widely distributed throughout Europe, western Asia and northwestern Africa, and it has also been introduced in Australia and New Zealand.

It’s also found in the Canary Islands and Azores. It’s a migratory bird and during the winter it spends its time in the warmer countries of the Mediterranean basin. The specimens living in the territories of the temperate belt, on the other hand, tend to be sedentary all year round. Cases of partial migration are not uncommon, with one part of the members of a group remaining settled and another migrating to warmer shores.

Its natural habitat consists of wooded areas, but its familiarity with man has made it more common in inhabited areas than in the countryside, and is easily encountered in parks, gardens, avenues, vegetable gardens and orchards.

The blackbird is a bird that mainly forages on the ground. It usually feeds on fruits with high energy content such as common hawthorn. It’s known to consume fruit species with a low concentration of seeds and easily digestible. blackbirds also eat sloe, ivy, elderberry, bramble and dog rose.

The blackbird also feeds on insects including cockroaches, caterpillars and grasshoppers, as well as snails, spiders and worms. To catch invertebrates, they turn leaves on the ground or tap and pluck moss. When it moves, it does so for short distances and stops abruptly, turning its head sideways to locate prey and hops as it digs the ground with its beak to catch worms.

The nest is built by the female and is generally found on tree branches, among bushes or even simply in holes in the ground. The female lays 4 to 6 eggs three times a year; they are of a blue-grey color, irregularly spotted with grey dots. The incubation period lasts for about two weeks and it’s mainly just the female who hatches the eggs.

It can be observed that the nest is built at variable heights from the ground. In particular, the level from the ground increases, depending on whether it’s the first, second or third brood. In fact, the blackbirds change the nest for each brood, they never use the same nest for the following broods. Generally this species lives in isolated pairs, even if during the migrations it can happen that it gathers in flocks.

Currently, the blackbird in Europe enjoys a favourable conservation status. The European population, considered safe, is extremely large (over 40 million couples) and remained stable in the period 1970–1990. During 1990-2000 it was also registered a modest increase, which further enlarged the already substantial populations of Germany, France and Italy. Although the blackbird population is stable or increasing in most European states, and the species is sufficiently studied when it comes to distribution, ecology and food spectrum, it should be noted that quantitative data and population estimates from some regions of the wide distribution range of this bird are lacking.