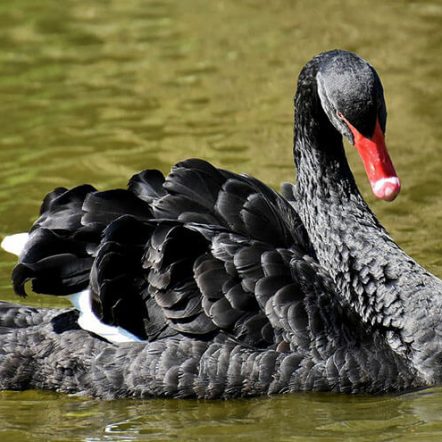 The black swan is a truly unique animal. It has held a special place throughout history, and continues to be a popular icon in culture today. Let’s take a closer look at this elegant beauty.

Eight things you need to know about the black swan:

1. Where Can You See Cygnus atratus?

Black Swans are native to Australia. Black swans populations have also been introduced to nearby New Zealand, as well as Japan.

Fun Fact: Prior to the discovery of black swans by Dutch explorers visiting Australia in the 1600’s, it was widely believed that all swans were white.

As the name implies, black swans are primarily black in color, with white tips at the end of their wings. They have deep red bills, red or pinkish eyes, and the longest necks of any type of swan. Young black swans may be grayish-brown in color before reaching adulthood. Adult males tend to be slightly larger than adult females.

Black swans are described as “waterbirds” because they prefer to be in and around bodies of water. They can be found in rivers, lakes, ponds, estuaries, and swampland.

4. What Do Black Swans Eat?

Black swans feed primarily on the plant life found in their natural habitats. They eat mainly different types of algae and submerged weeds, but also occasionally feed on insects, which can happen on occasions where they are forced to wander over land. The most common time for black swans to feed is in the early morning hours.

The breeding season for black swans is fairly long, spanning from February through September. Black swans are monogamous, meaning they most often stay in the same mated pair for life. Occasionally, large groups of black swans may gather and breed in the same location, but black swans tend to prefer mainly breeding separately as pairs where they claim and defend all or part of a small body of water that they choose as their nesting site.

The actual nest is usually made by the female swan, and composed of sticks, dead leaves, and debris, and becomes a floating mound on the water. The female lays eggs at a rate of one per day until a total of approximately 5 or 6 is reached… In order to ensure that the young hatch at the same time, the incubation is actually synchronized. The parents only sit over, but do not warm the eggs until the final egg is hatched. It takes 35 to 48 days for incubation, and both the male and female swans participate in the process.

The babies are able to fly at around 6 months, but may remain with the family until 9 months after birth. These babies will themselves then reach sexual maturity between 18 and 36 months of age. These newcomers to the world can expect to live, on average, for 40 years. One of the interesting outcomes of each annual breeding season is the period of molting that adult swans go through following the breeding season. During this time, they lose their feathers and are unable to fly.

The black swan has been a popular reference in culture throughout the years. In 1843, the philosopher John Stuart Mill used the example of black swans to point out how even large numbers of consistent observations of something can lead to an incorrect assumption – such as “all swans are white”. In 1912, the philosopher Bertrand Russell also cited this example of black swans defying generalized assumptions. Karl Popper, another philosopher, in 1934 cited how black swans were an example of how scientific assumptions, such as “all swans are white”, needed to be able to be proven false.

In modern times, a very famous book by author Nassim Taleb in 2007 titled Black Swan also used the example of the black swan as the centerpiece of its theory. In it, the author argued how dramatic and unexpected events, such as the discovery of black swans, matter more to history than regular, expected occurrences. He went on to advocate for how the example of the black swan can benefit society by seeking the unexpected, and how this philosophy could even be applied to things such as stock market investing.

Perhaps most recent in the mind of the reader might be the 2010 movie Black Swan, starring Natalie Portman, in which the main characters are symbolized as opposites and antagonistic through portraying white and black swans in a ballet.

Black swans are usually sedentary, but become nomadic when food is scarce. Black swans travel in flocks. They are skilled and graceful in flight, and make a characteristic whistling noise while slowly flapping their wings. While flying together, they tend to form a line or V-shaped pattern. Their travel is mostly nocturnal.

In addition to being graceful flyers, black swans are also graceful swimmers. Interestingly, they swim with only one leg, and tuck the other leg up above their tail. While graceful in the air and water, they are known to be rather clumsy when walking on land.

Black swan eggs and fledglings are threatened by ravens, eagles, hawks, rats, and swamp harriers. Black swan populations are, in general, not under threat, and they are not in any danger of being endangered at this time. In fact, in certain areas their populations can grow so large that they become a nuisance to farmers as they graze among their crops. To control these populations, some places have introduced limited hunting seasons, and as many as 7,000 black swans are shot in New Zealand by humans every year.

Fun Fact: The people of its native land have embraced the black swan, with Western Australia naming it the official bird of the area, and including it in both the flag and coat of arms.

The black swan has been a significant animal in terms of human thought, history, and culture for centuries, and we are fortunate enough to be able to continue to enjoy its elegance and beauty today.