The Black Redstart – A Red Tail Always On Alert
Share:FacebookTwitterPinterest 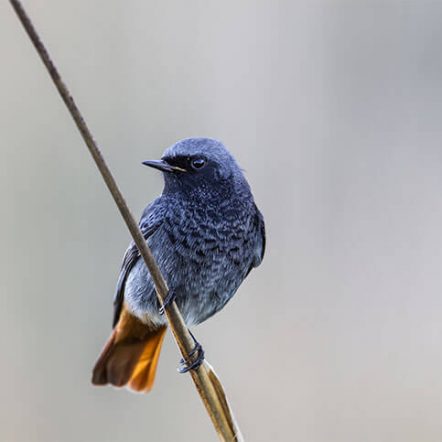 The Black Redstart – A Red Tail Always On Alert

Originally the black redstart was living almost exclusively in rocky areas, but already in the 18th and 19th centuries, due to the increasing urbanization and expansion of cities, it spread to the plains and then into the cities and villages, using buildings and high-rises instead of its native, alpine and rocky habitat. It nests at a maximum altitude of 3200m and it’s a very widespread species. It’s funny song is strident and it starts way before sunrise, giving the start signal to the birds for their morning concert.

Everything You Need To Know About The Black Redstart:

It may surprise you, but the bird with the largest spreading area on the European Alpine arch is the black redstart (scientific name Phoenicurus ochuros). Easily recognizable by its black plumage and red tail it is found everywhere thanks to its adaptability. Originally nesting in rocky walls, it has become accustomed to using man-made buildings as a breeding ground.

There is practically no place in the alps, be it the remote mountain village or the large metropolis, that does not host some couple of this little bird. As for the choice of the building there is no predilection; it can be a historical monument, like a Castle, or the most recent house, or an industrial warehouse or a stable of any mountain pasture. And it is easily found especially when singing on a wire or on top of a television antenna.

Particularly intelligent, the black redstart is a resourceful species. It often frequents rooftops, chimneys and antennas. During the night, it prefers crevices of walls or rock cavities instead. When not in flight, it is perched on overhangs of buildings or other perches, characteristic wiggling its tail. On the ground it proceeds in small hops.

To observe the black redstart you don’t need to be an expert hiker and take long walks in the mountains. Just open your eyes and look around and it will be easy to spot one of the many couples who live in the alpine regions. A lively and perpetually moving species, it is quite accustomed to the presence of man and escapes only in the event of an excessive approach or sudden gestures. He is among the first birds to sing at dawn, sometimes even before sunrise.

The Phoenicurus ochruros is a small passerine of less than 20 grams. The wingspan is about 23- 26 cm and the length can be up to 15 cm. The tail is red in both sexes, but the male is recognised by a general color tending to black and by the white wing spot, while the female, without the light part on the wings, is brown-greyish. Typical is the short song with alternating “tsip” and “tictic”.

In the summer, the black redstart frequents mainly mountain areas. In Europe it reaches altitudes of up to 2,600 meters in the Alps, but the Asian populations who inhabit the Himalayan area can reach up to 5,000 meters. In the past, the species inhabited only the mountain areas, while for some years, during the winter season, it prefers to go down to the valley to the plains and inhabited centers, an environment to which the Phoenicurus ochuros has now perfectly adapted, preferring less urbanized areas such as small towns, suburban centers and industrial areas. But it can also be observed in bigger towns where, often, it colonizes the highest buildings with its nest.

The range of presence of the black redstart includes Europe, Asia Minor and Tibet. During the wintering, individuals move from northern Europe to the Mediterranean regions and North Africa. On the other hand, it is almost absent in large areas of the British archipelago and in Scandinavia. One of the subspecies, the Phoenicurus ochruros rufiventris, goes east towards the Caspian Sea and Iran, reaching China.

The period of reproduction it’s in May, when the black redstart builds its nest in rock crevices in mountain environments or in the cracks and cornices of city buildings, more rarely in the cavities of large trunks. The cup-shaped nest is prepared with dried herbs, roots, feathers and moss.

The couple is monogamous and the female lays from 4 to 7 eggs, white in color, particularly smooth and shiny. The hatching lasts about two weeks and both parents take care of the chicks, which usually leave the nest about a month after birth.

In the European Union, the species is classified as safe and its state of health is also considered favorable at continental level. The black redstart it is a protected species and therefore not victim of hunting.

In the twenty years between 1970 and 1990, as well as in the following decade, the breeding population in the European Union remained stable with 2,600,000-5,900,000 pairs. At the continental level, the breeding pairs oscillate between 4 million and 8,800,000. While the southern Europe specimens are sedentary, the northernmost colonies are migratory.

The fluctuations recorded locally by the black redstart population require greater attention to the areas most threatened by environmental alterations, such as the mountain environment and areas subject to abandonment due to the progressive disappearance of traditional agro-pastoral practices, which would lead, in the medium term, to a possible narrowing of the range of presence of the species.