The Black-Headed Gull – A Sly And Laughing Hunter
Share:FacebookTwitterPinterest 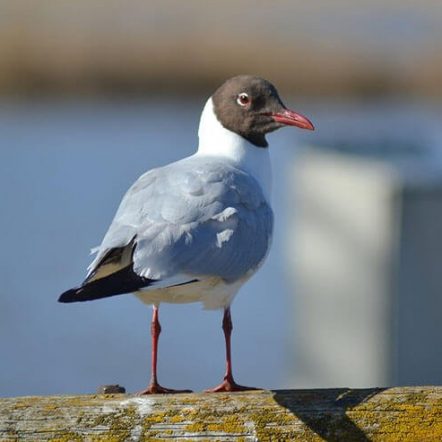 The Black-Headed Gull – A Sly And Laughing Hunter

In the cold season, the black-headed seagulls are regular guests on our waterfronts and are able to cheer up more than a grey winter day: how can we imagine our beaches and lakefronts without their acrobatic flights, fast as lightning, with which they manage to catch the bread that was actually meant for the ducks? In urban areas this opportunistic bird finds a rich, constant supply of food and its scientific name comes from its sneering, laughing call.

Everything you need to know about the black-headed gull:

The black-headed gull is an astute hunter, capable of adapting to environments that are not just the marine one: in fact, it’s not uncommon, to spot it in the fields or looking for small invertebrates among the plowed clods. It’s a gregarious species year-round, easily observable even in urban centers. More often than not it moves in big groups, even composed of hundreds and hundreds of birds, near municipal solid waste dumps and on agricultural land, for the most part on days of abundant rain or tailing tractors plowing the fields.

It’s also very common to observe the flocks in flight arranged in an obvious “V” shape moving in the morning, in the direction of the feeding spots and, later in the day, on their way back to the colonies. It’s definitely a bird that can feed on anything it finds around and, quite often, it can be seen stealing food from other birds, including fellow gulls!

The black-headed gull has a length of about 33-39 cm and a wingspan that can reach up to 1 m. The male and the female show an almost identical livery, with mainly white, grey and black coloring. In the summer dress, the head is covered by a dark brown hood (not black, even if can look black from far, hence the name) and a white ring that can be seen around the eye.

Outside the summer season, the brown hood disappears, leaving behind only a tiny spot right behind the eye and a light shade on the head, barely visible as well. Its legs and beak are colored in a darker shade of red, while the wings and the back are grey, black and white, featuring the characteristic design on the terminal part. The younger individuals have a mottled brown color and, will gradually take on the livery of the adults after about 2 years of life.

The black-headed gull is a species that nests in the mid-latitudes of the entire Eurasian Region, from the Iberian Peninsula and Iceland to Scandinavia and all the way east to the Asian Pacific coasts of Eastern China and Japan. However they’re quite uncommon in Italy, Greece and Spain.

The populations of north-eastern Europe are migratory and spend their winter mainly along the Atlantic coasts from the North Sea to north-western Africa and the Mediterranean, but also inland along the rivers and lakes; the populations of the south-western regions are only partially migratory or perform more dispersive movements. It sometimes visits the coasts of the North American Continent and can be observed on some of the Caribbean Island too.

The black-headed gull feeds on insects, worms, aquatic invertebrates and fish, which it catches on the surface of the water or by dipping its head; in some cases it steals the prey of other birds or rummages through the garbage. Very confident in man and not scared at all, it often accepts food from his hands. It also feeds on, crustaceans, annelids, mollusks, larvae, myriapods, amphibians, reptiles, nestlings and small birds, small mammals (voles, mice), grains, various seeds, tubers, herbs and algae.

Like all seagull species, in winter it leads quite a social life, both when taking care of the chicks and during the breeding season. The black-headed gull usually reproduces in colonies, where it nests twice a year, producing about 2-3 eggs, which it hatches for a period of about twenty days. Once hatched, the chicks are grey in color, dotted with dark spots. Once the breeding season finishes, both the young and adult black-headed gull will gather in flocks.

The breeding season runs between April and July and the colonies usually choose coastal sea areas, swamps or lake shores. Before mating there’s a ritual in which the competitors will face each other with their beak pointing at one another, head down and wings slightly open and pointing downwards. Both partner will take care of preparing the nest using vegetable material readily available, and the place usually chosen for this is a depression in the ground.

Classified as safe throughout the European Union, the species has a favorable conservation status even at a continental level. Overall, there was a large increase in the breeding population in the territories of the European Community in the decades 1970-1990, followed then by a moderate decline in the following decade 1990-2000.

The species is relatively well monitored in terms of consistency, distribution and demographic trend. On the other hand, knowledge on reproductive biology is more limited and the values ​​relating to the main demographic parameters are practically unknown.

The considerable fluctuations registered and the relative instability of the colonies also suggest extreme caution in evaluating the actual conservation status of the species. From this point of view, the need to favor the persistence of suitable conditions for reproduction in the environments frequented by the species and, in particular, in the sites hosting the main colonies, is paramount.