The Barn Owl (Tyto Alba) – A Friend of Humans
Share:FacebookTwitterPinterest 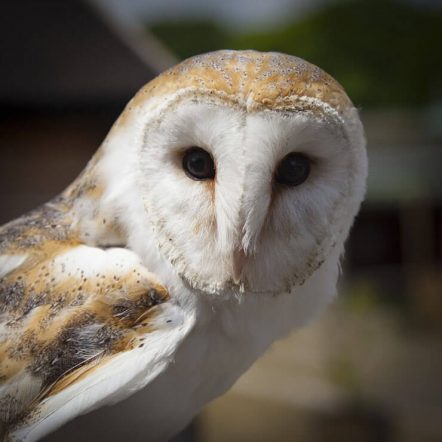 If there ever was a misunderstood creature, it is the barn owl. Barn owls are incredibly useful animals. They have been helping us keep rodents at bay for centuries. Yet they are feared across many cultures, earning the names demon owls or ghost owls in some places.

These harsh pseudonyms can be attributed to their unique pale, ghost-like appearance, peculiar facial features, and characteristic eerie screech.

Sadly, many myths and false beliefs have resulted in the widespread persecution of these barn owls. Luckily, awareness efforts help debunk myths as we learn more about these invaluable birds.

Everything you need to know about the barn owl:

1. Where do Tyto alba Live?

The barn owl is the most widely occurring owl and one of the most widespread birds in general. Various subspecies occur throughout the world, but overall there are three main groups: The American barn owls across North and South America; the Western barn owls found in Europe, West Asia, and Africa; and The Eastern barn owls which occur in Australasia and South-east Asia.

Although barn owls favour the open country, they are also common in urban areas. They typically live in grasslands, woodlands, forest openings, open fields, and farmlands.

Barn owls are sedentary birds, although young may disperse far from their nests.

Barn owls are medium-sized birds with long wings. Their short square tails help us identify them in flight.

They are unusual beauties with distinctive pale, heart-shaped faces and deep-set black eyes. A feathered ridge above the beak curiously resembles a nose.

The barn owl’s plumage varies in shades of browns and beiges with darker upperparts and lighter underparts. Many subspecies have speckles on their wings or underparts.

Males tend to have fewer spots in general and are paler in colour. Female barn owls are larger than males. Barn owl nestlings are covered in white down with a faint appearance of the characteristic heart-shaped face.

Barn owls hunt by quartering. They glide around in slow motion, scanning the ground in search of prey, often hovering over blind spots to locate concealed animals. Sometimes, they use branches, fence posts, and other vantage points as lookouts.

These owls have high metabolic rates and need plenty of food. Their diet varies depending on region, but the main menu items are rodents and small mammals. They also prey on birds, bats, reptiles, amphibians, and insects.

Barn owls use their talons and beak to dismember and tear their prey apart. They eat all the parts of smaller animals. With larger prey, they usually discard most of the skin, skeleton, and other inedible parts. Ingestible bits are regurgitated as pellets.

Researchers study owl pellets to determine what they ate and learn about their diet.

4. Creatures of the Night

Most barn owls are strictly nocturnal. Some species do hunt by day but tend to get mobbed by diurnal birds. They are sometimes seen during the day flying between roosting sites.

Barn owls have acute hearing and locate their prey by sound. Feathers on the edges of their faces trap and focus sound-waves. Like other nocturnal owls, their ears are located asymmetrically with the left ear slightly higher than the right. This helps them detect the position and distance of prey, and enables them to hunt in complete darkness. They are also able to locate animals beneath snow and vegetation with deadly accuracy.

These birds hunt with extreme stealth. They’re able to fly silently due to modifications on their wings. Tiny hair-like projections soften the wing-surface, and serrations on the edges of the flight feathers break the airflow over their wings, reducing noisy turbulence.

Barn owls have long, broad wings and are agile in the air. Long, slender legs enable foraging in snow and dense foliage. Their talons are long, with serrations under their claws to help them grip prey.

Unlike other owls, Barn owls don’t hoot. Instead, they produce high-pitched “shree” sounds.

When threatened or cornered, they flip onto their backs and flail around with their talons out. This defensive behavior is usually accompanied by snake-like hissing noises, rasping sounds, and snappy clicks.

Barn owls are monogamous. They usually roost separately and reunite at the nest site as breeding season approaches.

Breeding seasons vary depending on location and climate and generally coincide with food availability.

The male barn owl diligently tends to his mate throughout the breeding season. He emerges promptly at dusk to hunt while the female remains in the vicinity of the nest, preening herself while waiting for food. Such nurturing helps boost her nutrition for egg-laying, and also strengthens their bond. But even during incubation, the male continues to bring her food in surplus until piles form beside the nest.

Barn owls are cavity nesters. They occupy holes on trees, cliff-edges, and often in man-made structures like old buildings as they are usually warmer than trees.

Fun Fact: During incubation, females break up regurgitated pellets to use as nesting material when the chicks hatch.

Female barn owls lay up to five eggs on average. Barn owls have a month-long incubation period. Their chicks hatch over several weeks, so development is irregular among nestlings. By thirteen weeks, nestlings begin to learn how to fend for themselves.

Their predators include small carnivorous mammals like raccoons and opossums and raptors such as eagles and hawks. They are also preyed on by other owls.

Barn owls are susceptible to parasites such as fleas, lice, mites, flies, and parasitic worms.

They do not live long in the wild with an average lifespan of about four years. In temperate regions, many birds succumb to starvation during the winter season.

Barn owls are also prone to collision with vehicles and power lines.

Although they are common throughout most of their range, many localized populations have declined due to habitat loss and indirect poisoning from insecticides and rodenticides.

8. Relationships between Barn Owls and Humans

In many parts of the world, barn owls are considered evil omens.

In the past, farmers unaware of their benefits killed barn owls as they were erroneously thought to prey on chickens and other domestic animals. It was later found that such occurrences are rare.

Many people keep owls as pets. Although legal in some countries, it is discouraged by experts and animal rights groups.

Barn owls consume more rodents than any other animal making them economically invaluable in croplands. Farmers often find that they are more effective in controlling rodent pests than using poisons.

What can you do?

Installing a nest box in your garden is an excellent way to help barn owls in areas where populations are on the decline, especially in places where natural sites are scarce.

They can also be installed on farms to encourage natural rodent control and steer away from harmful and often expensive poisons.