The Alpine Chough – A Regular of the Ski Resorts
Share:FacebookTwitterPinterest 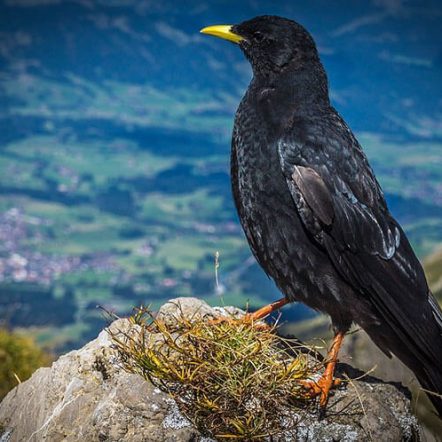 The Alpine Chough – A Regular of the Ski Resorts

by Federico "Fred" Fiorillo5 months ago

The Alpine chough is a familiar figure for mountain-goers: an acrobat of the air, it sails effortlessly around the highest peaks facing the most impetuous winds. Winter tourism allows these birds to resist even during the cold season at altitudes of over 3’000 m. In the vicinity of the mountain restaurants and picnic spots they abandon all fear of humans and let the tourists spoil themselves with every delicacy.

In case of bad weather, the Alpine choughs descend into the valley even in summer and can be seen flying in groups over the roofs of the villages, heralds of early snowfall. Like many corvids, the Alpine choughs are monogamous; faithful couples have already been observed together for more than eight years.

Everything you need to know about the Alpine chough:

In summer, the Alpine chough can be observed almost exclusively above the upper limit of the vegetation. It nests on rocky walls and feeds on alpine meadows and along the edges of snowfields. In winter, but only in the presence of heavy snow, it descends to the valley floor, frequenting meadows, orchards and inhabited centres. Tourist resorts located at high altitudes offer the species a safe source of food throughout the year, allowing it to winter even up to 2,500-3,000 meters above sea level. The Alpine chough is definitely a gregarious type of bird, and can be observed gathered in flocks of several dozen individuals, even up to a thousand in winter. It makes regular daily movements between the dormitories – or the nests placed on the rock – and the feeding spots.

The Chough has a completely glossy black plumage, with a yellow beak, which is certainly its most typical feature. Rather short and orange-red legs, black nails and dark sole. Long, rounded wings and tail. Its weight is about 180-270 grams, for a length of about 36-39 cm, and has a very wide wingspan in relation to its modest size, about 65-74 cm. The length of the tail is greater than the width of the wing. The apex of the wing is rounded with fairly short fingers. The base of the tail is quite narrow.

There is no sexual dimorphism in the colouring, even if the males are slightly larger than the females; only the young differ from the adults for the blackish colouring of the legs, which then will lighten up to eventually become red.

Distributed between Europe and Asia, the species has a very fragmented range, which includes the mountains of central-southern Europe down to the reliefs of Morocco. In Europe, it prefers medium and high mountain environments and is present with a strong and wide population on the Alpine arch, where it seeks shelter in rocky walls at high altitude.

The Alpine chough is a sedentary bird, in summer it mainly flies over very high areas, at altitudes of up to 3000 m, feeding along the alpine meadows and snowfields, while in winter, in case of heavy snow, it goes down to the valley, seeking shelter in orchards and towns.

The Alpine chough feeds on worms, snails, insect larvae, berries and, on occasion, even on small birds and mammals that it finds already dead. During the winter season it goes down to low altitudes, in the immediate vicinity of inhabited centres, in search of organic waste.

These corvids have managed to develop an ability to tolerate human disturbance and focus more on the search for food, while populations living in wilder areas suffer less from the disturbance, but are also less able to tolerate it. In the most touristic site, the frequent lack of interest of alpine areas and natural prey was also observed in favour of restaurants and shelters where it is easier to find food scraps from humans (hikers, skiers…).

These are behavioural changes that, while on the one hand seem to simplify the life of Alpine choughs, on the other they can cause many negative effects. The loss of attention to possible threats, for example, can expose them to greater risks coming from a diet based on a different and certainly not healthier food than their “natural” one.

During the nest building period (in late spring), the Alpine chough looks for very safe places among the rocky crevices, where to deposit its voluminous nest, made up of twigs and dry grasses. Once finished, the female will lay an average of 5 eggs, which will be hatched for 21 days, exclusively by the mother. Once the eggs have hatched and the young chicks are born, they will stay in the nest, fed by both parents for another 35 days, they will then fly alongside the parents, learning all the necessary tricks for searching for food and provide for themselves.

The Alpine chough is sufficiently studied as far as ecology and distribution go, but, due to the objective difficulty of carrying out investigations in the harsh and rocky environments in which the species lives and nests, there is a lack of sufficiently detailed quantitative data on the size of the colonies in the Alps. However, the European populations of Alpine chough show stable demographic trends and, therefore, the species is considered to be in a favourable conservation status.

Despite the fragmented range, due to the strong predilection of the species for high mountain environments, the European breeding population is quite large – more than 130,000 pairs according to the most recent estimates, equal to just under half of the global population of the species – and remained stable in the decades 1970-1990. Trend that remains unchanged in the following decade too, 1990-2000, for most European populations, including the key ones of France, Russia and Turkey.