The Greater Flamingo – A Magical Pink Bird Standing On One Leg
Share:FacebookTwitterPinterest 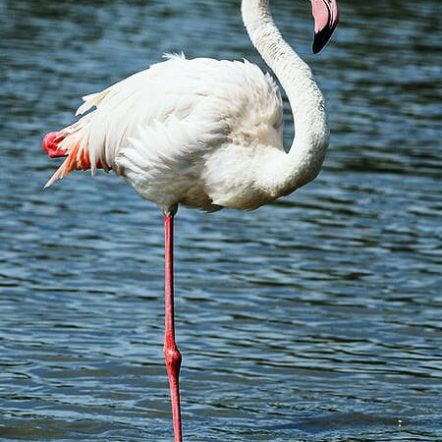 The Greater Flamingo – A Magical Pink Bird Standing On One Leg

Summer, low humid plain. It’s here that, at any moment, the dense network of canals between the mouth of rivers and the wide expanse of the valleys can be coloured by hundreds of flamingos, in search of food, and sometimes in search of fresh water too, since increasingly vast stretches of coastal marshes often presents, in particularly drought summers, phenomena of re-entry of sea water. Hundreds of flamingos that with their pink plumage mingle with the colours of dawn, only to disappear, as the day goes by, disturbed by the sun and the usual crowd of onlookers…

Everything you need to know about the greater flamingo:

A large bird of up to one and a half meters in height, the flamingo is found pretty much all over the planet. Its nominal subspecies is extremely colourful and it can nest anywhere between the Galapagos and the West Indies. It’s the more “common” greater (or pink) flamingo that is typical of European latitudes, but also of south-western Asia and Africa.

The greater flamingo is an highly mobile bird, moving across large portions of the Mediterranean basin, from one season to another, and, sometimes, even within the same season. Some of the main characteristic of this bird include its typical bright pink plumage and its dependence on humid and wet environments where plenty of its favorite mollusks and algae are readily available. But it’s also another peculiarity that has made the greater flamingo famous in the collective imagination: that long run that precedes the flight, during which the very long legs and the equally elongated neck stand out, while the beak, typically curved downwards, it does not serve so much to grab the prey, as to filter directly from the water, through particular gills, the small microorganisms that make up the main part of the diet of this species.

The greater flamingo is about 106 cm tall and has a wingspan of about one and a half meters; the plumage is pink and the tips of the wings are black. It has the typical long neck and legs with three toed webbed feet, and a large hooked beak with the black tip curved downwards, the interior of which is lined with two rows of lamellae.

Its long neck and legs are extremely useful when feeding in deeper waters, while its webbed feet help it when it comes to stand up and balance in muddy terrain. Bristles are also present on the tongue, with the aim of helping the flamingo to filter food from the water. One of the distinct aspects of his behavior is the way it stands on one leg. It does this to lose less body heat when it’s with its foot in the water.

The greater flamingo it’s the only species that can be found in the European continent, in particular it populates the areas of western and southern Mediterranean Europe: it can be found from Turkey, Greece and Cyprus all the way to Spain and Portugal, through Albania, Italy and France. But also it’s present in Southern Asia and Africa. Its habitat is represented by lakes and swamps, with shallow waters and with large expanses free from tall vegetation. We find it in salty, brackish and sweet waters, with a preference, among the latter, for those rich in minerals and alkaline.

The greater flamingo uses its feet to move and stir the mud up, sucking the water up with its long beak while filtering it to feed on the tiny shrimp, seeds, algae, micro-organisms and mollusks that make up its diet.

The color of the greater flamingo is partly determined by its diet: some of the foods it eats contain carotenoid pigments; which are then broken down in the liver and to eventually deposited in its plumage, skin and eggs of the flamingo. Generally in the wild, flamingos have brighter colors than those that live in captivity.

The female flamingo prepares a nest of piled mud (stone and debris can be used when mud isn’t available), in the shape a miniature volcano, on the top of which they lay the single egg, which is hatched for about 27 to 31 days. In more or less a week the chick comes out of the nest and joins a kind of “nursery”. Surprisingly, the adult flamingo is able to spot its chick among hundreds or thousands other birds thanks to its call. Young flamingos become able to fly after 65-90 days, but won’t reach sexual maturity before their third year. Most birds will not mate for the first time until 5-10 years of age!

Flamingos nest in large colonies. Males and females court each other with a variety of performances involving head movements, display of wings and vocalisations.

Until 1991 much of the community population of Flamingo was concentrated in the Camargue (France), and Fuente de Pedra (Spain). Precisely the progressive “saturation” of these colonies has probably caused the colonisation of some sites in Italy. Generally, the Flamingo population’s ecological habits brings it to concentrate in very few “optimal” sites, and then abandon them even at the slightest sign of disturbance, either coming from humans, predators, or climate variations.

So it’s important to proceed with a stringent protection of the most important sites of presence, both from anthropic disturbance and from predators, and, finally, trying to keep the water level in line with the ecological needs of the species, in order to support productivity and consequently keep high the nesting numbers.