Identifying Raptors – How to Differentiate Birds of Prey
Share:FacebookTwitterPinterest

Identifying Raptors – How to Differentiate Birds of Prey

Ever wondered how to tell apart a falcon from a hawk? Or confused a hawk for an eagle? This quick guide will help you identify the different types of raptors.

What is a Raptor?

A raptor is loosely defined as a bird of prey. The word raptor is Latin for “ravisher” or “plunderer” and comes from the Latin word rapere, meaning “to seize”.

Raptors are associated with hunting large vertebrates. However, many non-raptors are also able to take down large prey but are not included in this group. Also, some raptors hunt smaller prey, including invertebrates. So, what exactly defines a raptor?

All birds classified as raptors share a common ancestry. They evolved from terrestrial birds that preyed on vertebrates. Modern-day raptors are defined based on their evolutionary history and the adherence to the raptorial lifestyle of their ancestors.

Other Characteristics of Raptors

Raptors are generally large, heavy birds, although sizes vary greatly between species. The black-thighed falconet of Asia weighs just one ounce and is a mere six inches long – roughly the size of a sparrow! At the other end of the spectrum, the Andean condor clocks in at 25 pounds. It is around 45 inches in length with a nine-foot-wide wingspan.

Most raptors are sexually dimorphic, with females significantly larger and heavier than males. On the other hand, vultures, secretary birds, and seriemas exhibit little to no differences between sexes, and it is difficult to distinguish males from females.

Raptors are almost exclusively carnivorous, and though they have a reputation for taking large prey, they have a varied diet. Prey items can range from large insects to medium-sized mammals. They also eat fish, reptiles, amphibians, mollusks, crustaceans, small mammals, and other birds.

As a rule of thumb, larger raptors generally take on larger prey, but this is not always the case, and prey types often depend on seasonal and regional availability. Many raptors also eat carrion and are kleptoparasitic, meaning they often steal the prey of other birds.

Some raptors have specialized dietary niches, such as the fish-eating sea eagles or the snake eagles with their reptilian diet. Others are generalist feeders, and many are highly opportunistic and serendipitous predators.

Some raptors, such as the palm-nut vulture and the seriema, may include small amounts of plant foods in their diet. They are still, however, classified as raptors.

Most raptors are solitary and highly territorial. Some species form small flocks, especially when migrating or during winter. There are a few other exceptions. Vultures, for example, are fairly gregarious and are known to roost and feed in flocks.

Some species also nest in colonies. But most raptors spend the majority of their lives alone or in pairs.

Raptors are largely monogamous, with many species forming lasting pair-bonds. However, other mating systems do occur. Polygyny and polyandry have been observed in some raptors, as exhibited by the harriers and the bearded vultures respectively.

Birds of prey typically build large stick nests. The new world vultures, however, nest in large scrapes. Owls are another exception. They are cavity nesters and often occupy the abandoned nests of other birds.

Clutch sizes vary among species, but larger species generally have smaller clutch sizes and lengthier incubation periods. Most raptors are semi-altricial in that they hatch with their eyes open and are covered in down but are still reliant on parental care.

Things to Look Out for When Identifying Raptors

Large raptors include eagles, vultures, and ospreys. Hawks and falcons are small to medium-sized. The shape of the body, bill, head, and wings are useful identification markers.

Notice the plumage color and patterns when perched and in-flight. The plumage detail of the underparts can be used to identify flying raptors.

Vultures tend to glide, whereas eagles have a soaring flight pattern. Similarly, hawks have a slow, gliding flight, while falcons flap their wings more and glide for shorter distances.

Understand the different behaviors such as hunting habits, activity times (diurnal or nocturnal), and social behavior. For instance, a flock of raptors near a carcass is likelier to be vultures than eagles.

Learn which species are found in your area, their migration patterns, and what habitat types they occupy. This will help you rule out species when attempting to identify a raptor.

Eagles are the archetype for birds of prey. They are large, powerful raptors, easily identifiable by their size and soaring flight pattern.

Among the eagles are the true eagles (with fully-feathered legs up to the feet), the fish eagles or sea eagles, the snake eagles, and the forest eagles.

Vultures are large, scavenging raptors. Most species are either bald or semi-bald. They have small heads and large bodies. Their sharp bills curve at the end. Vultures have a characteristic hunched demeanor, and thanks to pop culture, they have gained a lot of bad press for their sinister appearance.

Although vultures are very distinctive birds, they may be confused with eagles when in flight. If you are close enough, you may notice the bald head of a vulture (although not to be confused with a bald eagle).

The wings are a more reliable indicator. Eagles fly with their wings flat outstretched, whereas vultures’ wings form a V-shape, and they often fly with their heads well below their shoulders as they scour the ground below. Vultures are often seen riding thermals or circling above potential prey in small flocks.

Always look at coloration for tell-tale signs. The bald eagle, for example, is unmissable with its white head and tail, contrasting against the dark body plumage. The turkey vulture has a bald, pink head and white flight feathers on the underwings.

A flock of vultures is called a “committee” or a “volt”.

Eagles can also be confused with hawks, but eagles are larger, with proportionally longer wings and larger bills. Hawks are medium-sized diurnal raptors.

Most hawks in North America fall under the Buteo genus, whereas in other parts of the world, Buteo species are called buzzards.

Goshawks, sparrowhawks, and several other hawks fall under the Accipiter genus, also known as the “true hawks”.

Harriers are large, slender hawks with long wings for gliding low over the ground. They fall under the genus Circus. Along with falcons, hawks are popular falconry birds.

Falcons are medium-sized raptors. They are known for their high speeds, intelligence, and use in the sport of falconry. Kestrels and sparrowhawks are types of falcons.

Medium-sized raptors can be tricky to identify when seen from a distance or in flight. But there are key features to look out for. Hawks are typically larger and bulkier, with broader wings. When in flight, their flight feathers are spread, resembling fingers.

Falcons are smaller and slender, and their long, sickle-shaped wings are a distinguishing feature. Their plumage is also very distinctive, with white cheeks and mustache-like facial markings.

Kites are small to medium-sized raptors with small bills and talons. They have characteristic forked tails and long wings for soaring.

Some species do not have a pronounced fork in the tail but rather a gentle inward curve.

The osprey is the only living member of the Pandionidae family. It is a large, diurnal raptor that feeds mainly on fish. There are two species of ospreys – the eastern osprey of Australia, and the western osprey, which is found on every continent except Antarctica.

The osprey is often confused with species of hawks or eagles. Look for unique features such as the white crown and underparts, a prominent auricular stripe, and piercing yellow eyes.

But some species, such as the northern hawk owl, may catch you unawares with its hawk-like behavior and striking resemblance to the Cooper’s hawk. And to add to the confusion, the hawk owl often hunts during the day.

But since most owls arenocturnal, if you spot a raptor hunting at night, it is likely to be an owl. Owls are equipped with excellent night-vision, hearing, and stealth. They have specialized flight feathers that allow them to fly silently.

Although they are strongly associated with nocturnal behavior, some species are active during the day, while others may hunt diurnally depending on the season. And many owls are crepuscular – meaning they are active at dawn and dusk.

Although they belong to separate families, these two raptors are similar in appearance and occupy the same ecological niche in their respective ranges. Luckily, you will never have to distinguish between these two birds in the wild.

The secretary bird is native to sub-Saharan Africa, while the seriema is found in South America. Both birds inhabit grassland and savannah-type habitats and hunt on foot. Types of prey include insects, reptiles, rodents, and small birds.

The secretary bird is a monotypic species, whereas there are two species of seriema. Unlike the secretary bird, the seriema may also eat small amounts of grains, legumes, and other plant foods.

Now that you are equipped to identify the different birds of prey, be sure to get some practice. Next time you are out birding, be on the lookout for raptors and see if you can identify the different types. The next step is identifying individual species. Grab a local bird guide, a pair of binoculars, and become a raptor-specialist birder in your area. 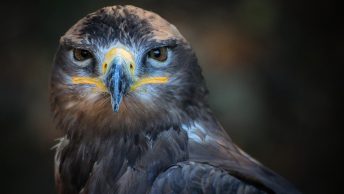