The Atlantic Puffin: Clowns of the Ocean
Share:FacebookTwitterPinterest 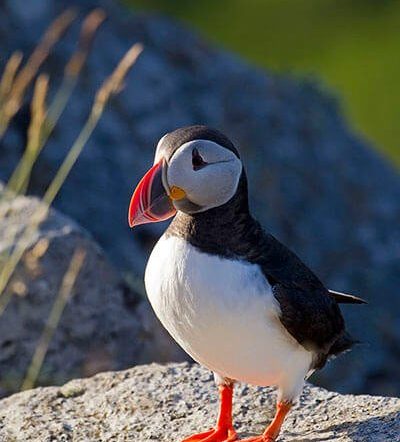 The Atlantic Puffin: Clowns of the Ocean

The Atlantic puffin (Fratercula arctica), also known as the common puffin,is one of three species of puffin found worldwide. They are members of the auk family, which also includes the guillemots, murres and auklets.

Everything you need to know about the Atlantic puffin:

The auk family, to which puffins belong, are small pelagic seabirds classified by their small stocky bodies and short wings used for ‘flying’ underwater. Like other seabirds, they are generally dark above and light below (see section on adaptations to life at sea for more on this). The generic name Fratercula means ‘friar’ in Medieval Latin, referring to the birds’ black and white plumage, which resembles a monk’s robes.

Puffins can be distinguished from other alcids (members of the auk family) by their colourful orange and yellow bills, which are flattened and shaped like spades. There are two other species of puffin, the horned puffin (Fratercula corniculata) and the tufted puffin (Fratercula cirrhata). The Atlantic puffin can be distinguished from the horned by its orange legs (the latter have yellow legs). The tufted puffin is unique in having black rather than white underparts.

4. Adaptations to Life at Sea

Atlantic puffins spend the majority of their lives out at sea, and as such they have a number of adaptations to the marine environment. As mentioned previously, seabirds are generally coloured dark on top and light below, and the Atlantic puffin is a perfect example of this. This is known as ‘countershading’ and provides them with excellent camouflage whilst sitting on the surface of the sea or diving below to catch their prey.

Puffins also have salt glands, called ‘supraorbital glands’ since they are located behind the eyes, which allow them to excrete the excess salt they take in through their diet, and which enables them to survive without any access to fresh water. These glands extract salt-filled fluid from their blood, and it is then ejected through the nostrils and runs down grooves in the bill, often forming droplets at the end of the bill.

The Atlantic puffin’s diet consists almost entirely of fish, although they have been known to eat crustaceans, molluscs and polychaete (bristle) worms. Most favoured prey items include sand eels, herring, sprats and capelin. Prey is caught whilst diving, using their short, strong wings as paddles and feet as a rudder to steer.

Atlantic puffins are extremely fast and agile underwater, and can reach speeds of up to 85km per hour, dive to depths of up to 60m and can remain underwater for up to a minute. Small items of prey are often swallowed underwater, but larger prey is brought to the surface.

They achieve this using their ‘denticles’ – fleshy spikes on the roof of their mouths against which their tongue can push and hold the fish – and using their two highly flexible mandibles, which are hinged in such a way that they can be held parallel. Generally, puffins will hold ten or so fish in their bills at a time, but reports of up to 120 fish have been made!

Atlantic puffins nest primarily on islands with no terrestrial predators, so the main threat is from the air. The primary predators of puffins are the great black-backed gull (Larus marinus) and the great skua (Stercorarius skua). Both of these species will prey on adult puffins as well as their eggs and chicks. Puffins also have to contend with kleptoparasites – other bird species that steal their food. Birds such as herring gulls and arctic skuas will attempt to steal fish from puffins as they return to their burrows with food for their chicks. In response, puffins will often circle past their burrows several times in an attempt to find a safe passage in.

Like many seabirds, the Atlantic puffin nests in large colonies on coastal cliffs and islands, in burrows. This provides their eggs and chicks with extra protection from harsh weather conditions and the predators described above. Puffins dig their burrows using their bills and feet; the spade-shaped bill is perfect for scraping away at the soil, and their webbed feet particularly adept at kicking the soil out behind them. Sometimes, existing holes made by rabbits are used. The burrow is then lined with feathers and grass.

Atlantic puffins are typically monogamous as a result of having a high nest-site fidelity (they tend to return to the same nest sites each year, even using the same burrow). At the beginning of each breeding season, usually March to April, individuals re-establish their pair bonds using courtship rituals that include bowing and ‘billing’ – rubbing their bills together whilst rapidly shaking their heads.

Puffins usually lay one egg. Males and females will share the duty of incubating the egg and rearing the chick, known as a ‘puffling’. Incubation takes approximately 40 days, and chicks will remain inside the burrow and depend on their parents for food for a further one or two months, depending on the area and year.

8. A Unique Ability Among Seabirds

Research published in Bird Study in 2018 found that puffins’ bills actually reflect UV light, making them ‘glow in the dark’. This discovery was made when a dead puffin, which had died of natural causes and was being used for another study, was placed under a blacklight. Scientists still aren’t sure what the function of this is, but it could be used in courtship, making a puffin more attractive to a member of the opposite sex.

9. Relationship with Humans and Conservation Status

Historically, puffins were hunted and harvested across much of their range, for their eggs, feathers and meat. During the 19th century, they were heavily relied upon for food by inhabitants of remote islands, including the Blasket Islands off Ireland and the St Kilda archipelago in the Scottish Hebrides.

Though they are they are now protected at many of their breeding sites, they are still hunted in Iceland and the Faroes, where they are afforded no legal protection. This is carried out using a method known as ‘sky fishing’, where they are caught with large nets as they dive into the sea.

They also face a number of other threats, such as overfishing of their prey species, introduction of terrestrial predators at their breeding colonies, and pollution, particularly oil spills. However, the main cause of decline appears to be a reduction in food supply at their breeding colonies due to increased sea temperatures. They are currently listed as Vulnerable on the IUCN Red List.

It’s not all bad news, however, and some Atlantic puffin populations have been making a comeback, particularly on islands where rats have been eradicated and are no longer predating on eggs and chicks. This year’s Covid-19 situation has resulted in a reduction of tourists at the Farne Islands breeding colony in the UK, where over 40,000 puffins breed annually, and it is thought that this has allowed the puffins to expand their breeding grounds.

Becky is a conservation biologist from the UK specialising in marine ornithology. She has spent most of her career on tropical islands managing and coordinating research projects on special reserves, tagging sea turtles and monitoring breeding terns and shearwaters. She now works on small cruise ships as an expedition guide, traveling to far-flung places including Antarctica, the Arctic, Patagonia and the Indian Ocean, teaching passengers about seabird behaviour and conservation.